Paul Zimnisky on The Year of The Laboratory-Created Diamond 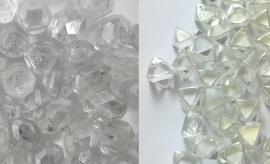 Independent diamond industry analyst and consultant Paul Zimnisky, proprietor of the Zimnisky Global Rough Diamond Price Index, takes an in-depth look at developments in the laboratory-grown diamond market in his latest contribution to the discussion, "2018: The Year of the Lab-created Diamond". Here he focuses on the impact (or current lack thereof) that De Beers launch of its Lightbox lab-grown diamond line (announced late May 2018, first available late September 2018) has had on the pricing of laboratory-grown goods. Reprinted here courtesy of Paul Zimnisky.

2018: The Year of the Lab-created Diamond

News flowing out of the diamond industry in 2018 has been dominated by the progression of lab-created diamond production, distribution and pricing dynamics. Numerous new players have entered the space, production capabilities have improved and supply has been scaled. This year alone, the price differential of a generic 1-carat lab-created diamond has fallen by almost 50% relative to the price a comparable natural diamond (the discount in late-November of 42% has risen from 29% in January).

In late-May, industry bellwether De Beers(1) crossed the Rubicon, announcing the company would be entering the lab-created diamond jewelry space through a subsidiary called Lightbox. The move implies a nuanced strategy with a general aim at differentiating consumer perception of lab-created and natural diamonds. In late September the product became available to consumers exclusively through the company’s website with the notable item a 1-carat solitaire pendant offered for $800 plus a nominal setting fee. At the time of launch an equivalent-quality 1-carat generic lab-created diamond was selling for around $3,700.

Within the first week, almost all of the Lightbox 1-carat solitaire pieces sold out according to the company’s website. Skeptics of De Beers assumed this was confirmation that Lightbox was purely a predatory pricing strategy to lower the market-price of lab-created diamonds and De Beers did not have real inventory backing what was just a façade.

According to a Lightbox representative in October, initial demand for the 1-carat solitaire pieces exceeded expectations, resulting in a temporary sellout (of note, a significant amount of the initial demand came from curious industry participants). Further, it was noted that the items would be restocked in relatively short order given that production of Lightbox diamonds is an ongoing process through De Beers’ synthetic diamond production subsidiary Element 6 in the U.K.

The process of growing a 2.5-carat rough lab-created diamond (the approximate size that yields a 1-carat polished) typically takes 3-4 weeks, plus additional time to cut the diamond and manufacture the jewelry. As of early-November, out of 43 Lightbox items offered, 5 were still sold out. There was only one 1-carat solitaire item available, a white princess-cut pendant offered at $900 ($800 for the diamond plus $100 for the sterling silver setting and chain).

In the company's initial Lightbox press release, De Beers noted that a new $100 million Element 6 facility in the U.S. is being built to cater to Lightbox diamond production. Prior to this year, Element 6 facilities in the U.K have been exclusively dedicated to synthetic diamond R&D and production for industrial application.

The U.S. facility, located outside of Portland Oregon, is expected to produce upwards of 500,000 rough carats annually starting early next decade. The production will yield approximately 200,000 polished carats a year. At that production rate, and given the linear pricing structure of the diamonds ($200 for a 1/4-carat, $400 for a 1/2-carat etc.), Lightbox is estimated to be about a $175 million business for De Beers and parent-Anglo American. For reference, De Beers produced over $5.8 billion in revenue in 2017 and represented less than 20% of parent Anglo’s total business.

On October 31, only a month after Lightbox diamonds became available to consumers, Berkshire Hathaway-held (NYSE: BRK-A) jewelry manufacturer Richline announced that new lab-diamond line “Grown with Love” would be available this holiday season through U.S. department stores Macy’s (NYSE: M) and JCPenney (NYSE: JCP). The launch marked the first wide distribution of lab-created diamonds through a brick and mortar retailer. The line notably includes engagement rings with diamonds as large as 3-carats in size.

Despite, De Beers’ Lightbox move only weeks earlier, the “Grown with Love” line is being marketed at a price point commensurate with where lab-diamonds were selling before De Beers entered the scene. For example, JCPenney is selling a 1-carat “Grown with Love” solitaire ring for $3,750 and a 1.5-carat for $6,500, both which grade at near-colorless and SI in clarity. While Lightbox diamonds are strategically not sold with a grading certificate it is estimated that they are near-colorless or better and VS is quality, which is a notch above SI.

Numerous other new players have recently entered the lab-created diamond jewelry space and most are targeting bridal products and diamond sizes greater than 1-carat, the two areas that De Beers is not breaching, at least initially. Similar to the “Grown with Love” strategy, most of the new entrants are attempting to maintain price points that are symbiotic with natural diamond pricing instead of using a Lightbox low-cost producer, linear pricing model. The former pricing strategy is typical in luxury, where higher price points can provide the perception of worth, rarity and hopefully greater desirability.

However, competition from low cost producers is inevitable, especially in Asia. Currently, Chinese synthetic diamond producers churn out billions of carats a year for industrial uses, primarily abrasives, but there are examples of companies upgrading equipment allowing them to produce larger, higher-quality synthetic diamond, fit for use as jewelry. For example, hydraulics as well as heating and cooling systems of existing high-pressure high-temperature (HPHT) presses are being improved in order to sustain longer cycles to grow larger, better-quality diamonds.

As an anecdote, there are currently producers in China selling 2-carat near-colorless rough in SI clarity for $300. Some of these producers are also selling polished. For example, a 0.80-carat, the polished yield from a 2-carat rough, is being offered for $425. This compares to a Lightbox retail price of $640 for an equivalent sized diamond, using their $800-per-carat linear pricing metric.

It is worth noting that the low-cost producers are typically using the HPHT method of lab-diamond production and seem to be maxing out in sizes of about 2.5-carat rough or just below, yielding polished of 1-carat or just below. Whereas most of the start-ups in the West are using the chemical vapor deposition (CVD) method of production and multiple producers now seem to have the capability to produce rough that is well over 5-carats in size.

Some of the CVD start-ups appear to have operating profits approaching 50% using the higher price points mentioned above in the >1-carat polished items, the size-category that at the moment is protected from Lightbox and the low-cost producers in the East. The question is how long will this window last?

Further, even though there is not currently competition from Lightbox or the low-cost producers in the >1-carat polished category, an important question still remains: how many consumers will be willing to pay thousands of dollars today for a diamond that is theoretically unbound in supply and possibly holds no resale value? It is a reasonable question to ask given that a 2-carat slightly-better-than-medium-quality lab-created diamond currently sells for over $10,000.(2)

Perhaps the “Grown with Love” line will be the first reliable proxy capable of answering this question given the wide distribution and promotion backing it.

--
1 De Beers is 85% owned by Anglo American plc (LSE: AAL) and 15% owned by the Government of the Republic of Botswana.
2 A loose 2-carat, G-color, VS1-clarity lab-created diamond is currently offered for $10,100 on Brilliant Earth; a 2-carat “Grown with Love” lab-created diamond set in a white gold ring is currently offered for $11,950 at Macy's.