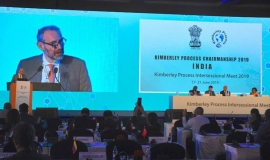 With the Kimberley Process (KP) Plenary starting next week in New Dehli, KP Observers are saying the certification scheme has reached the moment of truth as to whether it will expand its definition of 'conflict diamonds', a move many see as critical to the KP's continued relevance.

Last week, World Diamond Council (WDC) President Stephane Fischler said the forthcoming KP Plenary taking place from November 18-22, marking the end of the KP’s three-year review and reform cycle, could prove to be a “watershed moment” for the body that was launched at the start of 2003 to ensure that diamonds whose proceeds were fuelling civil war against legitimate governments were kept out of the pipeline. The Civil Society Coalition (CSC), consisting of 11 NGOs (10 African, 1 Belgian), today issued a press release calling the KP Plenary a “make-or-break moment" for the KP to "restore faith" in the mechanism and "stop the flow of blood diamonds" once and for all.

WDC President Fischler wrote in a blog that "Some tough discussions will still be had" at the KP Plenary "as difficult decisions need to be made – none more so than whether the scope of the Kimberley Process Certification Scheme will be strengthened." He says that the WDC remains firmly committed to going beyond the “currently limited ‘conflict diamonds’ definition” implemented by the KP, stating that the organization will seek to win support for its call to broaden the scope of the term which is currently defined as: 'rough diamonds used to finance wars against governments'. He writes, “Recognizing the outdated definition, the WDC, along with civil society and a number of government representatives, are insisting that it be amended to include instances of unacceptable violence in the supply chain during peacetime as well.”

Fischler writes, "A number of proposals are on the table, among them one that was formulated by the WDC together with the Civil Society Coalition and tabled by the Government of Canada. Others have been proposed by Botswana and the Russian Federation. The meeting in New Delhi will decide which, if any, will be approved." Although industry representatives will be present at the meeting, only governments can vote to change the definition, and that vote must be unanimous. Despite the fact that the WDC does not have a final say in the matter, "that does not mean that we are passive players," Fischler writes. "We most definitely are able to set responsible industry standards for the goods reaching the market. The new WDC System of Warranties (SoW), which applies to all rough and polished diamonds handled by the trade, requires a commitment by companies to adhere to WDC Guidelines. These go beyond the KP’s currently limited 'conflict diamonds' definition, expressly referencing international conventions relating to human and labor rights, anti-corruption and anti-money laundering (AML)."

The CSC, on the other hand, is much more critical in the view of the 'conflict diamonds' definition, and their combative tone is unmistakable (see the full press release below). "For over a decade, civil society and increasingly industry observers to the Kimberley Process have been decrying how the scheme is failing to stop diamonds affected by various forms of conflict from flowing onto international markets. Now ...  it is up to the 82 participating states ... to take their responsibility in finally addressing the most significant flaws in the scheme’s scope and efficacy. This includes broadening the narrow definition of conflict diamonds, improving the governance framework and ensuring respect for the tripartite nature of the KP by allowing both civil society and industry to fully take up their role as watchdogs and advisors to the process."

The CSC very bluntly states that the certification scheme is losing its purpose and relevance because of the KP’s narrow conflict diamond definition. “While KP certificates claim to guarantee the conflict-free provenance of stones, as a matter of fact the scheme only intervenes where diamonds are exploited by rebels to fight governments”, explains Shamiso Mtisi, Zimbabwe-based coordinator of the CSC. At present, solely diamonds from non-compliant zones in war-torn Central African Republic are refused KP certificates. They write, "Diamonds tainted by other types of conflict, such as sexual violence, torture, inhumane treatment and environmental crimes, or violence and killings by actors other than rebels, continue to flow onto the international market largely unchecked. Worse, the Kimberley Process certifies such diamonds as 'conflict free', potentially aiding to whitewash such stones vis-à-vis unwitting jewelry consumers reliant on KP assurance."

The CSC adds that whereas civil society and industry observers have been vehemently pushing for reform in numerous meetings and working groups, decision-making power in the KP rests solely with state actors. Hans Merket, researcher for Belgian-based KPCSC member IPIS. “If the KP does not succeed in moving beyond its niche focus, and in providing genuine assurances to diamond consumers that their purchases are not tainted with blood, it will continue to lose credibility. Worse, the process will become ever more irrelevant in a world that is increasingly moving towards responsible mineral governance.”