World Diamond Council Gears Up for KP Plenary Next Month 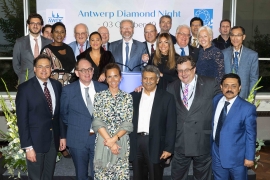 With less than two months to go before the Kimberley Process (KP) ends its current reform and review cycle at the 2019 KP Plenary in New Dehli, the World Diamond Council (WDC) met in Antwerp for its Annual General Meeting to refine their System of Warranties and prepare to make a final push to strengthen the definition of conflict diamonds before the reform and review cycle closes. In addition to the definition issue, WDC members hope to see the finalization of the establishment of a permanent KP secretariat and the creation a multi-donor trust fund, the terms for which have been accepted and now need to be implemented. The 2019 WDC Annual General Meeting was organized by the Antwerp World Diamond Centre (AWDC), which during the evening of October 3 hosted a dinner for participants, members of the local diamond industry, representatives of government and the European Union, and members of the diplomatic corps.

The WDC’s revised System of Warranties (SoW) expects that all entities subscribing to it include a declaration (a warranty) on their invoices confirming that the diamonds they trade are in compliance with all the requirements of the Kimberley Process Certification Scheme (KPCS). This SoW system is operative across the value chain on a B2B level, right up until the moment the consumer purchases the diamond. The revised SoW now expressly includes references to international standards supporting human rights and strict labor practices. It was approved last year, and the WDC is currently working on a toolkit that will assist companies throughout the supply chain in adopting the voluntary mechanism. In this light, WDC President Stéphane Fischler said that individuals and companies in the industry must remain alert as well as conduct due diligence to ensure that any rough diamonds originating from CAR are KP-compliant. CAR-issued KP certificates can only be accompany rough diamonds that have been extracted at one of the monitored sites.

During the General Meeting, the WDC reiterated its express ambition, shared by its host, the AWDC, to continue to play a leading role in the establishment of a value chain that guarantees the greatest possible transparency and compliance. Consumers are demanding greater traceability and transparency in a product’s value chain; their choices are increasingly guided by whether a brand or product has a demonstrably positive influence, including the support of social and economic conditions.

At last year’s KP Plenary in Belgium, the WDC and the Civil Society Coalition (CSC) voiced their strong support for a proposal to strengthen the KP’s official definition of what constitutes conflict diamonds. The proposed change would extend the definition beyond rough stones that finance wars against governments to include rough diamonds associated with other instances of grave, widespread and systematic violence. The WDC also voiced its support for a declaration of general principles for responsibly sourced diamonds proposed by the U.S. Department of State covering human rights, community development, health and labor standards, environmental impacts, and the combatting of corruption, terrorism and organized crime.

President Fischler said, “We need to put in more effort and push forward for the current reform process to succeed. By focusing on real and lasting change, based on fairness and justice, with the commitment not only of countries and their leaders, but also international institutions and business investors, we can finally make good on our promises.” The WDC this week expressed hope that the KP Participants will support the amendment at the KP Plenary in India next month. "I remain convinced about the natural diamond’s ability to face down the competition from other luxury products, travel and electronics, and even increase its market share, but to do that we need to be able to tell a compelling story. In the natural diamond we have one, but it must be and remain a story of shared benefits."

This is the final year of Fischler's term as WDC President; next year, the WDC will be presided over by the current Vice President, Edward Asscher. The WDC also paid a special tribute to their outgoing Executive Director Marie Chantal Kaninda, who has joined the staff of the commodities trader Glencore in the Democratic Republic of the Congo, where she will serve as Executive Director & Head of Corporate Affairs. She has agreed to support the WDC at the KP Plenary Meeting next month in New Delhi, and as Fischler concluded, "She has instilled within us a sensibility and broader perception of our industry that will remain long after her departure."