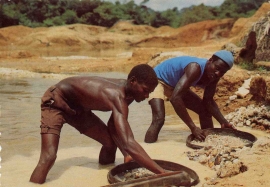 Imports of rough diamonds from the Marange Diamond Fields in Zimbabwe and gold mined in artisanal small mines (ASM) in eastern Democratic Republic of the Congo (DRC) have been blocked by U.S. Customs and Border Protection (CBP) on the suspicion of forced labor. The two items were on a list of five products from five different countries singled out for 'Withhold Release Orders' (WRO) which were issued "based on information obtained and reviewed by CBP that indicates that the products are produced, in whole or in part, using forced labor", the agency writes.

“A major part of CBP’s mission is facilitating legitimate trade and travel,” said Acting CBP Commissioner Mark Morgan. “CBP’s issuing of these five withhold release orders shows that if we suspect a product is made using forced labor, we’ll take that product off U.S. shelves.” The agency explains that under U.S. law, it is illegal to import goods that are made wholly or in part by forced labor, which includes convict labor, indentured labor, and forced or indentured child labor. When sufficient information is available, CBP may detain goods believed to have been produced with forced labor by issuing a WRO. Allegations of forced labor may come from a variety of sources, including from the general public. Investigations may be initiated a number of ways, including news reports and tips from either the public or trade community. CBP may also self-initiate an investigation into the use of forced labor in any given supply chain. Once a WRO is issued and a product is detained, importers have the opportunity to either re-export the detained shipments or submit information demonstrating that the goods are not in violation.

“CBP is firmly committed to identifying and preventing products made with the use of forced labor from entering the stream of U.S. Commerce,” said Brenda Smith, Executive Assistant Commissioner, CBP Office of Trade. “The effort put into investigating these producers highlights CBP’s priority attention on this issue." Todd Owen, Executive Assistant Commissioner, CBP Office of Field Operations adds, “We encourage the trade community to know their supply chains to ensure goods imported into our country are not produced with forced labor.”