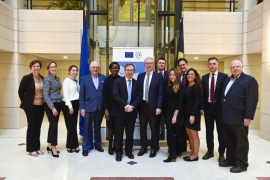 With their Annual General Meeting kicking off tomorrow in Antwerp, the World Diamond Council (WDC) today issued a statement concerning rough diamond exports from the Central African Republic (CAR). The WDC is an industry organization representing the full range of diamond-related organizations, including miners, manufacturers, retailers and trade organizations. Its primary mission is is to represent the diamond industry in the development and implementation of regulatory and voluntary systems to control the trade in diamonds embargoed by the United Nations or covered by the Kimberley Process Certification Scheme (KPCS).

Given that the WDC is holding its annual meeting in Antwerp, it is worth nothing that a 2014 KP Administrative Decision urged countries with trading centers to enhance vigilance regarding potential violations. Antwerp, as the leading trade center with the highest focus on compliance, responded by strengthening its control mechanism and focus on due diligence accordingly. The statement is reprinted in full below.

In light of recent media reports about the trade in rough diamonds associated with the ongoing civil conflict in the Central African Republic (CAR), the World Diamond Council (WDC) has reiterated its call to members of the industry to practice the utmost caution when considering the purchase of goods that are known to have originated or are suspected to have originated in the CAR.

The WDC emphasizes that the only rough diamonds sourced in the CAR that currently can be purchased legitimately are goods from parcels carrying CAR Kimberley Process (KP) certificates. This means that they have been mined in “green” compliant zones, which are areas under secure CAR-government control, and where the KP also has determined that diamond production meets Kimberley Process Certification Scheme (KPSC) minimum requirements. For this to occur, there can be no evidence of armed rebel group activity in the area.

Furthermore, all KP-certified rough diamonds from the CAR need to have been approved for export by the Kimberley Process’ specially designated CAR Monitoring Team chaired by the United States and including representatives of a number of KP’s Working Groups, as well as representatives of the WDC and civil society.

Speaking last week in Dubai, WDC President Stephane Fischler highlighted the role played by the CAR Monitoring Team, noting that, with due support from the United Nations, it acts as one of a few stabilizing factors in a country that has long suffered the devastation of civil conflict. These continuing efforts are crucial to bringing peace and stability to the region, he said. They mirror the part played by the KP in previously war-torn parts of Africa, where the KPCS was successful in shutting down sources of revenue for rebel forces, allowing the affected countries’ diamond deposits to better meet their potential as generators of economic and social development.

Mr. Fischler called on other KP-member countries to practice enhanced vigilance concerning the import of goods from the CAR. He also urged all members of the trade to strengthen the integrity of the diamond supply chain by proactively implementing the guidelines contained in WDC’s new System of Warranties. These also underscore the need to assess risks in areas beyond the KPCS, including human and labor rights, AML and anti-corruption.

While not responding directly to it, the WDC's statement to members of the diamond industry comes a day after publication of a New York Times article claiming the Russian government is capitalizing on the unstable situation in the CAR to gain a foothold in the diamond-rich country. It alleges a quid-pro-quo situation whereby Russia is attempting to stabilize the country in exchange for diamond mining rights. It goes further to charge Russian mercenaries with exploiting the more lucrative diamond mining areas currently under embargo by the Kimberley Process, meaning that any diamonds mined in those regions are banned from trade on the legitimate market.