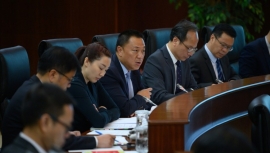 The Legislative Assembly of Macau, or officially the Macao Special Administrative Region of the People's Republic of China, recently passed a government-initiated bill which will enable Macau to implement the Kimberley Process Certification Scheme (KPCS). This will allow the city to formally engage in the international trade in rough diamonds in line with international standards. The bill will take effect on October 1 and aims to help Macau develop a rough diamond trade sector. Its outline was passed during a plenary session of the legislature in April.

In October 2018, the Macau Secretary for Economy and Finance, Lionel Leong Vai Tac, signed an agreement in Beijing with the Director of the General Administration of Customs of China, Ni Yuefeng, to support Macau in the Application of the Kimberley Certification Process. At the time, Secretary Leong said that signing the agreement and applying the KP in Macau would speed up the development of the Macau manufacturing industry and promote its diversification. During the recent meeting, Leong said the Macau government signed an agreement with the Shanghai Diamond Exchange a year ago for a diamond exchange center to be set up in Macau, intended to help the city develop a diamond-related sector, such as diamond processing (cutting and polishing) and diamond design. The Shanghai Diamond Exchange is the only diamond import and export market in the interior of China.

China has been a member of the KP since 2003. In October last year, the local government signed an agreement with the General Administration of Customs in Beijing to support Macau in implementing the Kimberley Process Certification Scheme. Hong Kong has implemented the scheme since 2003. There are currently 55 members in the Kimberley Process Certification Scheme – representing 82 countries with the European Union (EU) and its 28 member states counting as a single participant.