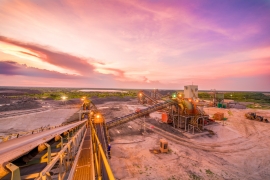 In Gem Diamonds’ Half Year 2017 results, announced on 17 August 2017, shareholders were notified that an offer to acquire 100% of the Ghaghoo asset ("Ghaghoo") had been received and was being considered by the Board.
Discussions have not resulted in agreement between parties and this offer has been withdrawn, the company announced this morning.

Gem Diamonds adds that they are presently in discussions with other parties interested in acquiring 100% of the Ghaghoo asset and will update the market as and when appropriate. The Board decided to place the Ghaghoo mining operation on care and maintenance in February 2017, due to market conditions.  Full care and maintenance status was achieved in March 2017. At the time, the company said the mine at Ghaghoo had nearly reached the point of being ready for full commercial production, but, "The material fall in the prices of its diamonds from US$ 210 per carat in early 2015 to US$142 per carat at its most recent sale in December 2016, emphasises the weak state of the diamond market for this category of diamonds. With the Company's focus on profitable production, the decision has been made to place the asset on care and maintenance, and to continue to monitor market conditions for a time when commencing full production would make economic sense."