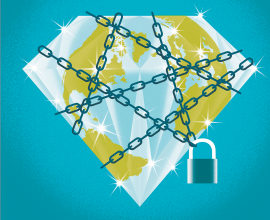 The Antwerp World Diamond Centre (AWDC), representing the largest diamond trade hub worldwide, and diamond mining company De Beers today announced at the KP Plenary in Brisbane that they are discussing a potential collaboration in De Beers’ recently announced blockchain platform. De Beers Group CEO Bruce Cleaver said that in recognition of the crucial issue of confidence in the diamond industry and the changing expectations across the value chain, the company has been investing in a platform to create, "the first traceability platform to span the entire diamond value chain ... underpinned by blockchain technology." It turns out the AWDC has been looking for a way to get just such an initiative off the ground in Antwerp as well.

AWDC CEO Ari Epstein: “We have been exploring many initiatives to further our mission to boost business in the rough and polished diamond trade, as well as manufacturing. In addition to our B2B initiatives in this field, we have closely examined blockchain technology as a potential solution to strengthen compliance as a means to reinforce the banks’ trust into the diamond industry. Last year, we finalized a feasibility study that demonstrated how the blockchain could increase transparency and confidence. In October, we launched a public request for proposal, inviting the blockchain community to submit solutions, specifically targeted at the diamond industry." He adds, "The De Beers’ and BCG Digital Ventures’ announcement of a diamond traceability platform underpinned by blockchain technology is an opportunity to assess and jointly define an inclusive solution, through an open platform that can work for and be used by the entire industry.”

The potential of the De Beers platform is unique in its approach to industry inclusivity, as it proposes to offer all companies in our business a unique possibility to demonstrate transparency in an irrefutable way. Several smaller miners reacted very positively to the iniative, though they were non-committal about endorsing it. Answering to one major concern of many interested yet still skeptical parties, the technology, according to De Beers, guarantees privacy, putting the owner of the data in control of it, and its outcome is a tamper-proof and permanent record of interactions. AWDC, meanwhile, says it is committed to increasing transparency related to invoices, transactions and shipments. This underpins bankability, and creates stronger opportunities for new financial institutions to the diamond industry.

Illustration for Fortune by Neil Webb