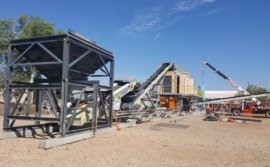 Merlin Diamonds is getting ready to process its first kimberlite ore through its new Tomra X-Ray Transmission (XRT) machine at its Merlin Diamond Mine in the Northern Territory, designed to enable the recovery of larger diamonds. Merlin announced on December 1 that the Tomra X-Ray Transmission Machine had been delivered to the mine site and would be commissioned in December. In addition to larger diamonds, the machine is also expected to recover more low luminescing diamonds than previously possible. Stockpiled ore will be used to fully commission the XRT sorter over the coming months, and any large diamonds up to 40 millimetres in size will be recovered, compared to the previous 20 millimetres.

The company also considers it possible that over 150,000 tons of material can be processed for several months without significant mining costs, as XRT sorters work more efficiently, more accurately, faster and more cost-effectively than conventional equipment. This material can feed the XRT machine until the company commences mining the higher grade kimberlite from the Gwain pit. Merlin will be commencing operations with a focus on the recovery of large diamonds. The largest diamond recovered in Australia, a 104.7 carat stone, was from the Merlin diamond mine. Lucara Diamonds' well-known Karowe Diamond Mine in Botswana has installed multiple XRT sorters, enabling them to recover the 1,109-carat Lesedi La Rona, the second biggest recovery in history. Merlin re-commenced operations at the diamond mine in October 2016 with the processing plant being refurbished and production commencing with steady ramping up of the production process. The mine previously produced Australia’s largest diamond at 104 carats. Since the re-commencement of operations a 35.3 carat diamond has been recovered which reflects Merlin’s history of recovering large diamonds.