Zimbabwe Scraps Local Ownership Policy for Foreign Investments, but not for Diamond Mining 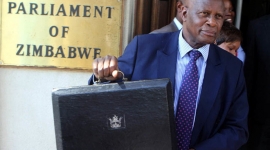 The government of Zimbabwe has removed the local ownership requirement for foreign investment into the country - laid down in the Indigenisation and Economic Empowerment Act - with the exception of the diamond and platinum sectors, Finance Minister Patrick Chinamasa announced in a major policy change by the new administration. President Emmerson Mnangagwa, who has made job creation one of his priorities, had telegraphed his radical policy shift by dropping the indigenisation portfolio when he named his cabinet last week. The indigenisation law, which requires 51 percent control by locals in the major sectors of the economy, has been blamed for Zimbabwe’s inability to attract significant foreign investment and create empolyment. The country has an estimated 90 percent jobless rate.

“Diamonds and platinum are the only sub-sectors designated as extractive. Accordingly, the proposed amendments will confine the 51/49 indigenisation threshold to only the two minerals,” Chinamasa said. “The 51/49 threshold will not apply to the rest of the extractive sector, nor will it apply to the other sectors of the economy, which will be open to any investor regardless of nationality.” Announcing a $5.8 billion 2018 budget themed: “A new economic order”, Chinamasa declared that Zimbabwe was open for business. “Zimbabwe is now open for business, and is putting in place supportive measures that seek to rebuild confidence and compete for investment, and enhance the economy’s competitiveness,” he said.