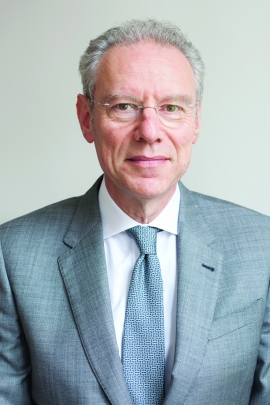 As the Kimberley Process 2017 Plenary is set to start in Brisbane on Saturday, December 9, The Diamond Loupe sat down with the Acting President of the World Diamond Council (WDC) and President of the Antwerp World Diamond Centre Stéphane Fischler to discuss the industry oganization's recommendations and what they are expecting from this Plenary. Only yesterday, the WDC issued a statement calling for an open discussion around KP reform at the Plenary, including broadening the scope of the KP within the debate on the expansion of the definition of conflict diamonds.

The Diamond Loupe: The WDC has been outspoken in its support for expanding the definition of conflict diamonds and thus the scope of the Kimberly Process Certification Scheme (KPCS). In 2012, the WDC proposed to change the definition of “conflict diamond” to include “diamond-related violence in rough diamond producing and trading areas”. This has been on the table before, but has always been rejected. Do you see an opportunity to break down this resistance and get something done?

Stéphane Fischler: The WDC actively supports responsible, ethical behavior that upholds human rights throughout the entire diamond supply chain. For five years now (Vicenza 2012), the WDC has expressed support for broadening the scope of the KP to increase the likelihood of safe and secure working conditions, fair labor practices and sustainable development in diamond communities. That is still our position today.

The WDC is but one voice in the KP tripartite. The industry (as represented by the WDC) as well as the Civil Society Coalition consisting of 11 NGOs serve as official Observers of the process.  Neither group has voting or veto rights. Updating the definition requires consensus from the participating governments (as the third member of the tripartite) to agree on changes to the KPCS.

In an effort to add greater transparency and accountability in the diamond industry, the WDC created an extension of the KPCS known as the System of Warranties (SoW). This voluntary system of guarantees extends the effectiveness of the KP from rough to polished diamonds, covering the entire diamond supply chain. It serves as a declaration by suppliers that the rough and resulting polished diamonds are of conflict-free origin. This is but one example of the industry's effort to drive greater transparency.

At this very moment, the SoW is being reviewed to formalize principles related to the “duty of care” for responsible business practices, with the goal being that any size organization, including small and medium sized businesses, will be able to implement them.  These are intended to raise awareness and incorporate more human rights assurances as recommended by various governance-related international and national treaties.

TDL: One of the critical items on the agenda, and seemingly the lynchpin to a whole range of recommendations to the KP and the Core Document, is the establishment of a Permanent Secretariat in a neutral country. Does this initiative have sufficient support in principle to be adopted at the Plenary?

SF: We hope so, but it remains to be seen. The WDC strongly believes in the need to strengthen governance in the KP and build stronger institutions to implement the KPCS. Establishing a permanent secretariat based in a neutral country is crucial to the implementation of the KPCS. The WDC recommends this secretariat be ready to act 24/7 on all KP matters and that it be funded by KP Participants together with the Observers on voluntary basis.

TDL: What would be the main stumbling block?

SF: That remains to be seen. Our aim in Brisbane is to establish a positive and formal consensus around the need for a permanent secretariat. Once this is achieved, its term of references will be discussed, including its funding and location. It will be an inclusive and step-by-step process.

TDL: The WDC recommendations encourage the licensing of all diamond mines and miners, buyers, exporters, couriers, etc., and they strongly encourage electronic documentation, messaging and the creation of a database for diamond production. How far away are Participants from meeting these recommendations?

SF: You are referring I believe to the need to strengthen the implementation of the KP standards, in particular the security features related to the KP certificates, the system of import confirmation as well as to strengthen the foot printing database. Indeed, the WDC believes these need to be reviewed and improved.

TDL: Recently, in an interview with Rough-Polished, African Diamond Council and African Diamond Producers Association chairperson, M’Zee Fula Ngenge said non-diamond producing countries should not lead the KP. He referred specifically to UAE, but with the EU Chair coming up in 2018, how would you respond to this assertion?

SF: My first reaction is one of satisfaction. That the chairperson of the ZDC and ADPA publicly states the need for African producers to take more ownership of the process, is very positive. Having said that, one has to realize that ensuring an ethical supply chain requires two parties. Those at the start of the chain and those at the end. Miners as well as diamond jewelry retailers have an equal stake to ensure that the values attached to diamonds remain undisputed. It must remain a collaborative effort.

TDL: Diamondfacts.org just updated their website. This seems like a good move, as the message about diamonds doing good needs to be made much more publically and forcefully. How should the industry promote this message?

SF: Talk, share, inspire and explain. That is what needs to be done. That is also what will be on the agenda for next year.

TDL: What are your expectations for the EU Chair in 2018?

SF: I believe the EU is as strongly committed as ever to the process, but let us first make sure we achieve a positive outcome and meaningful progress in Brisbane.

The World Diamond Council (WDC) is an industry organization focused on preventing conflict diamonds from entering the global supply chain and on preserving the value attached to natural diamonds. Formed in 2000, it is the only organization where the diamond trade is represented in full, from producer to retailer, and includes the most influential commercial businesses, not-for-profit organizations, and individual companies in the industry today.