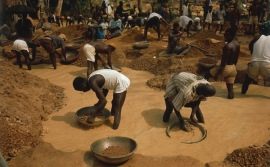 The Diamond Development Initiative (DDI) has undertaken a sensitization initiative for border communities in the Mano River Union (MRU) region - which comprises the countries of Liberia, Sierra Leone, Guinea and Côte d'Ivoire - to raise awareness of the Kimberley Process requirements and strengthen local capacity to monitor the flow of diamonds. Economic integration, entailing among others the free flow of people and goods across their borders, is a pillar of ECOWAS, the Economic Community of West African States, which was established to ensure regional cooperation and shared prosperity.

This largely successful initiative means that people in Liberia, Guinea, Sierra Leone and Côte d’Ivoire can take advantage of generally unrestricted and unmonitored border crossings for economic, social and personal activities. "Unfortunately," says the DDI, "that has included free transit of diamonds across the borders, even though it is illegal - a fact that is not known by all. What’s more, the significant artisanal mining in these countries already makes controlling production and trade of diamonds difficult, as the process is usually informal and under the radar, from digging to trading to export." On the other hand, the Kimberley Process Certification Scheme (KPCS), of which the Mano River Union countries are all members, includes provisions for internal controls, primarily established for ascertaining the origin of diamonds and providing certification at the point of export.

Considering the regional nature of trade and economy in this area, the KP has established a Regional Approach for the Mano River Union. The Regional approach aims to improve law enforcement, secure production from mine to export, ensure government revenues, and produce greater benefits to diamond mining communities. During a recent visit to Guinea, DDI Executive Director Dorothée Gizenga met with representatives of the government, the police, border control, GIZ and local civil society to provide training on the Kimberley Process requirements, and design an awareness campaign that will initially target two border communities, recognized as transit areas for diamonds. “This project is exciting, but it’s only a pilot,” says Ms. Gizenga. “There are other crossings and other countries in the Mano River Region that need this information and support. What’s more, border communities are only one element in the fight against smuggling and the strengthening of internal controls to ensure KP compliance.”

The DDI receives support in this effort from the German International Development Agency (GIZ), through the Regional Resource Governance Program, will be providing support to the KP Regional Approach for the Mano River Union countries to strengthen their mining sector regulations by supporting regional cooperation on issues of KP implementation.