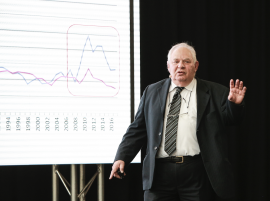 The vanguard of independent diamond-industry journalism, Chaim-Even Zohar, last week announced his retirement, bringing more than 40 years of uncompromising investigative reporting to an end. The modern diamond industry has come of age under the highly respected and keen analytic eye of Even-Zohar, who founded and published Mazal U’Bracha (now Idex), and Diamond Intelligence Briefs (now Diamond Intelligence Briefing - DIB), the sticks he would use to poke the industry, as well as inform it. In a letter to subscribers to the DIB, publisher Even-Zohar writes, "Forty-five years of deadlines, fact-checking, working around the clock, being subjected to considerable legal and physical threats, and constantly on the road all come at a price." As he is now in his 70s, the time has come to "rearrange his life's priorities." It has been noted that DIB is likely to be sold to an Asian buyer.

Many leading figures in the diamond industry have paid tribute to Even-Zohar's journalism, his dedication and the wealth of knowledge he brought to his publications and lectures. World Federation of Diamond Bourses' (WFDB) President Ernie Blom issued a statement expressing his appreciation for the long-standing work of Chaim Even-Zohar and the DIB, stating, "I don't think it would be an exaggeration to say that Chaim Even-Zohar has had a huge impact on the diamond business for the past several decades. His breaking of big news and other work based on exceptional research and contacts made him a hugely important figure in our business right around the globe.I have known Chaim for many years, and always found him to be a person of integrity who was determined to get to the very root of stories. He would not be put off by threats, and declined to take advertisers so that he would not need to take commercial interests into account when reporting."

President of the World Diamond Council and AWDC Stéphane Fischler commented, "It could neither be facile nor desirable to be considered the moral and intellectual compass of the diamond industry, yet Chaim's unique combination of commitment, integrity and knowledge, combined with the chutzpah to tell it like it is, has foisted these expectations upon him. Not to mention the fact that he is the most charming and endearing trade journalist the industry has ever known. A thorn in the side of the industry whose barbs will be sorely missed."

Rob Bates, whose "Exit Interview with Chaim Even-Zohar" paints a revealing portrait of Even-Zohar's career and current views on the industry's past, present and future, writes of his "onetime mentor" that, "The diamond trade will be a far duller, and possibly more dishonest, place without him." Even-Zohar tells him, however, that, "I won’t disappear from the Earth. I’m part of the industry. Even when you are retired, you are part of the industry."

We at The Diamond Loupe wish to express our appreciation not only for Chaim Even-Zohar's generosity in allowing us to publish several of his articles in this space, but for all the hard-won insights and understanding he was willing to share on a regular basis about the most pressing issues and stories shaping the diamond industry. We wish him well, and look forward to a long and fruitful dialogue in the years to come.