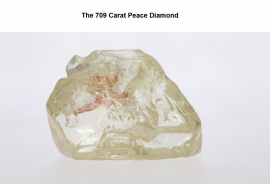 The 709-carat "Peace Diamond", considered the 14th-largest rough diamond in history and recovered by artisanal miners in Sierra Leone’s Kono district in March, sold at Rapaport's auction in New York for $6.5 million, approximately $1.2M less than was originally offered for the stone. This despite - or perhaps because of - its tour through the major diamond trading centers. Renowned jeweler Laurence Graff was the buyer. Martin Rapaport, surrounded by Sierra Leonean officials at their press conference in New York, apologized that his efforts did not yield what they had hoped. "This is the price of transparency," he stated, meaning that once everyone had the opportunity to inspect the diamond first-hand, they were less enthusiastic about its potential. Rapaport had previously acknowledged the challenges of the big diamond. The original bidder at the Sierra Leone tender offered approximately half the price of his original bid, Rapaport said. Seven bids were received for the stone.

The government of Sierra Leone first auctioned the stone in May, but rejected the highest bid of $7.8 million, and subsequently appointed Rapaport as its sales and marketing agent. The sale of the Peace Diamond in a transparent manner was designed to ensure the proceeds go to building up key local infrastructure, explained Martin Rapaport. The diamond’s value comes more from its story than from its physical characteristics, he insisted. The sale will be liable to a 15% royalty to the Sierra Leone government and 30% income tax. In addition to Pastor Emmanuel Momoh, who owns the diamond, the five artisanal diggers who found it will receive a significant amount: 20%, as stated today. While Rapaport has not released the rough diamond’s color and clarity specifications, it likely contains at least one 95-carat to 100-carat polished diamond, Martin Rapaport said. “This is not a simple diamond,” he explained. “It is a diamond which has many diamonds in it. This is probably one of the most complicated diamonds in the world."