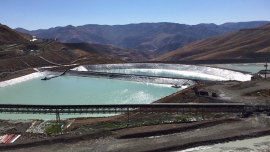 Firestone Diamonds commenced production at the Liqhobong diamond mine in Lesotho in October 2016, developing the new mine on time and under budget and hitting its early operational targets; however, lower than expected diamond prices achieved have forced the young miner to revise their plan. They held their first sale in Antwerp in February 2017, and on 30 June 2017 achieved commercial production. In late September, they reported they have sold all 505,706 carats recovered, for US$41.3 million, at an average value of US$82/ct. This compares to the company's updated definitive feasibility study in 2013 which was based on an estimated average base case value of US$107 per carat. They said they expected an improvement in the occurrence of higher quality diamonds as the higher grade kimberlite areas are mined and treated, and are analysing the variability in average diamond values to date, which has ranged from US$107/ct to US$69/ct.

Firestone announced they have revised the life of mine plan from 14 to nine years, with the option to revert to the 14 year plan should the quality of the recovered assortment and rough diamond market improve. They believe by adopting the shorter plan, with the flexibility of reverting to the longer 14-year plan, they will be best positioned to operate on a sustainable basis should the lower average diamond values persist, and can take advantage of the longer life of mine should the average values received increase or if there is an improvement in market conditions. They have also undertaken a restructuring of the Group's ABSA debt facility, extending its maturity to December 2023 and obtaining an 18 month standstill on capital repayments from January 2018 to June 2019. In the meantime, they are planning a potential capital raise of US$25.0 million to provide additional working capital and to sustain the Group at the current lower than expected average diamond values.

Firestone CEO Stuart Brown said, "The 2017 financial year was successful. We achieved a number of milestones. However, the weaker-than-expected diamond market, together with our lower-than-anticipated recovery of higher-value diamonds, has put pressure on our cash reserves and meant that we have had to raise additional equity and restructure our debt in order to be able to adopt a revised mining plan which seeks to maximise cash flow in the shorter term while we address the issues affecting value recovered." They company has seen its share price fall approximately 77% on the year.