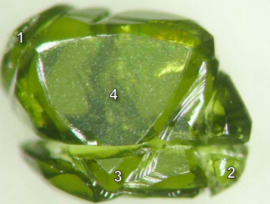 Peregrine Diamonds reports that its 2017 resource expansion drill program has confirmed the high-grade CH-6 kimberlite extends from surface to 540 metres below surface (mbs). This represents an additional 280 metres below the 260-metre depth of the current CH-6 Inferred Resource announced on April 7, 2017. The CH-6 kimberlite remains open below 540 mbs, the current limit of drilling. Tom Peregoodoff, Peregrine’s President and CEO, said: “The results confirm that the high-grade CH-6 kimberlite extends well below the current resource base of 260 metres. The microdiamond data from this years’ drilling clearly demonstrates that not only is the grade of this newly-defined extension of the CH-6 kimberlite very similar to that which we have previously defined, but also that we can expect the same macro diamond size distribution, which has important implications for future diamond valuations." He added, "We've got the potential to double the number of diamonds contained. If they can be extracted economically, we potentially have added significantly to both the mine life and eventual economic outcome of the project."

They are now using this information as the basis for a new resource statement due in mid-February, in which they expect to add significantly to the overall diamond content of the CH-6 kimberlite. Additionally, Peregoodoff says they recovered, "a very rare green diamond [that] bodes well for the presence of other rare, coloured diamonds that could have a significant impact on the overall average prices eventually received for diamonds recovered from the Chidliak project.” Four fragments of a unique green diamond were recovered from one 8-kilogram sample, and the company reconstructed it (photo).

Peregrine Diamonds is advancing its 100%-owned Chidliak project towards a Phase One diamond mine development, with an Inferred Resource of over 15 million carats. Chidliak, located 120 kilometres northeast of Iqaluit, the capital of Nunavut, on Canada’s Baffin Island, hosts 74 kimberlites in total (71 on Chidliak claims, 3 on Qilaq claims), currently eight of which are believed to be potentially economic. Two of these kimberlites, the CH-6 and CH-7 bodies, form the foundation for Phase One Diamond Development at Chidliak.