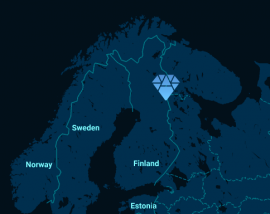 Arctic Star Exploration Corp has started its diamond exploration program on its Timantti diamond project in Finland, the company stated last week. The company said ground geophysics will be conducted over the area of the 243 hectare exploration permit, which contains the diamondiferous Black and White Wolf kimberlites. Named the Timantti Project (timantti is Finnish for diamond'), Arctic Star, a Canadian diamond and mineral exploration company with diamond exploration properties in Nunavut (Stein), the NWT (Diagras and Redemption) and in the Athabasca Basin of Saskatchewan agreed to acquire a 100% interest in a 243 hectares exploration permit last July.

The ground-based, magnetic, gravity and electro-magnetic surveys are designed to help define the shape and size of the Wolf kimberlites, as well as to detect possible new kimberlite-like anomalies within the area for drill testing. Arctic Star said 20 backhoe till samples would be taken in the near vicinity of the Wolf kimberlites to identify potential drill targets based on diamond indicator mineral results. The proposed drill program will comprise roughly eight holes including the two Wolf kimberlites.

"The assay results demonstrate that the Wolf Kimberlites have significant micro-diamond counts comparable in number to those found in economic kimberlites. The current drill program is designed to significantly boost the size of the sample, at which stage the company should have an estimate on the size and the grade of the diamonds, and allow us to make a decision to proceed to bulk sampling," said Buddy Doyle, vice president of exploration at Arctic Star.