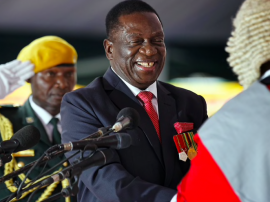 "ALROSA will play its role in diamond mining in Zimbabwe", said Zimbabwe's ambassador to the Russian Federation, Mike Nicholas Sango, to TASS news agency. Following Robert Mugabe's resignation and the transfer of power to former vice-president Emmerson Mnangagwa, countries and natural resource companies will be testing the waters of the new administration, and Russia's ALROSA will apparently be one of them. "Russia hopes to continue constructive cooperation with Zimbabwe under the new authorities, both in the bilateral format and on the global arena", said Russian Foreign Minister Spokeswoman Maria Zakharova last week.

A key area of cooperation between Russia and Zimbabwe is production of precious metals and diamonds. In 2012, according to KP statistics, Zimbabwe was the world’s fourth largest diamond producer in terms of volume, with 12 million carats extracted in 2012. By 2016, after the country announced the consolidation of all diamond mining enterprise into a single state company, that figure had fallen to just over 2 million carats. Obviously, the industry has seen a decline, with many projects having foreign participation being rolled back. ALROSA had conducted exploration in Zimbabwe in 2013-2014, and had plans to identify primary diamond deposits in 2016, but does not currently have existing projects in the country. The company withdrew from Zimbabwe after the reforms in the diamond mining sector.

Russia’s biggest diamond foray into Zimbabwe was the DTZ-OZGEO project, a joint venture between Russian company OZGEO and the Development Trust of Zimbabwe, which had a special grant to explore and mine diamonds. The company developed a gold deposit in Penhalonga and a diamond deposit in Chimanimani, with proven reserves of five million carats and resources of up to 50 million carats. Investments were estimated at US$97 million. Following the industry reform, however, the Zimbabwean side bought DTZ-OZGEO for mere US$5.4 million.

Whether the new regime will be more accommodating to foreign companies is anyone's guess, but Mr. Mnangagwa vowed at his inauguration that, “all foreign investment will be safe in Zimbabwe,” addressing fears after moves by former leader Mugabe to nationalize the country’s lucrative resources such as diamonds. This may in particular be a gesture to China; a recent article claims, "The diamond mines were, in fact, the source of China’s increasing concerns about the Mugabe regime", as the Zimbabwean government integrated two Chinese diamond companies, Anjin and Jinan, into the state owned Zimbabwe Consolidated Diamond Company (ZCDC) in 2015, which led to vehement public opposition by the Chinese government. The threat to Chinese investments in the diamond mines also hurt the Zimbabwean military, which has close ties to the Mnangagwa faction. After being ousted from his vice presidency by Mugabe in November 2017, Mnangagwa reportedly fled to China.