New Yorkers Lining Up for Breakfast at Tiffany's 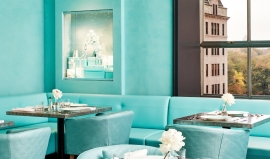 On November 4, luxury jeweller Tiffany's & Co opened a cafe on Friday as part of a renovation of their Manhattan flagship store at Fifth Avenue and 57th Street in New York City, and it appears to be a hit. The opening of the Blue Box Café revisits a scene from the 1961 film in which actress Audrey Hepburn (Holly Golightly) snacks on a croissant while gazing into a shop window on Fifth Avenue. No food was served then, but it is now - if you get a seat. The “Breakfast at Tiffany” breakfast starts at $29, and comes with coffee or tea, followed by a croissant and seasonal fruit and rounded out with your choice of a buttermilk waffle, smoked salmon and bagel stack, truffle eggs, or avocado toast. The prix fixe lunch, which includes a starter and main courses like the Fifth Avenue salad, with Maine lobster, grapefruit and poppyseed dressing, and an olive-oil poached salmon, with caviar and smashed potatoes, costs $39. Check out the full menu.

The restaurant-in-retail setting appears to be taking off and is more than a gimmick; rather, it fits into the shopping-as-experience. As John L. Dorman writes for NYT, "With many traditional retailers losing customers at their brick and mortar locations to online competitors, there has been an increased focus on cultivating experiences for shoppers." The trend also segues nicely into the idea of women (in particular) coming for the restaurant and perhaps to purchase, as these days the keywords in the diamond industry are “self-purchase” (a woman buying jewelry for herself) and “just-because" purchase (not for a special occasion). As identified in its annual Diamond Insight Report, De Beers found that millennials spent $26 billion on diamond jewelry in 2015, and 31 percent of those purchases were pieces women bought for themselves. According to De Beers, female self-purchasing is on the rise, especially among those in the 25- to 39-year-old age bracket, such that they have become a target customer.