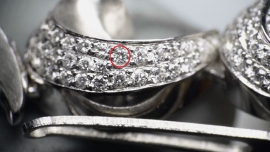 Since 2012, CVD synthetic diamonds have been tested and identified by National Gemstone Testing Center (NGTC) in Beijing, typically in sizes above 0.20 ct.  Since 2015, a large number of melee-size colorless and near-colorless synthetic diamonds have been detected in daily screenings at NGTC labs. Melee-size HPHT synthetics are accurately screened and identified at NGTC labs using new devices, and Melee-size CVD synthetic diamonds were reported by GIA’s Mumbai lab earlier this year. In March 2017, NGTC’s Beijing lab received 24 pieces of pearl and diamond jewelry from a domestic client, who claimed they were imported. Synthetic melee diamonds were identified in 14 of the 24 pieces. Most of the synthetic specimens were HPHT grown, but one was a melee-size CVD synthetic.

The near-colorless CVD round brilliant (circled in image) was mounted in a pearl earring with about 200 natural melee diamonds. The estimated weight of this CVD melee is 0.01 ct. This is the first time NGTC has identified a melee-size CVD synthetic diamond mounted alongside natural stones. This development is concerning, considering the challenge it would pose for gem laboratories. CVD synthetic screening requires more time and effort than HPHT synthetic screening, since the rapid methods of phosphorescence observation currently used would no longer be reliable. Therefore, new screening techniques and instruments are needed, conclude authors Shi Tang, Jun Su, Taijin Lu, Zhonghua Song, and Jie Ke.