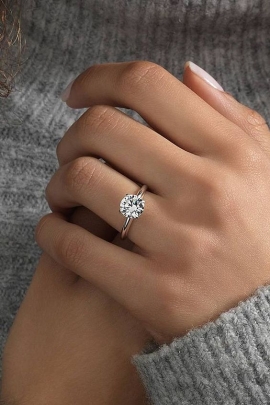 According to a survey of more than 14,000 engaged or recently married individuals undertaken for the 2017 Jewelry & Engagement Study by popular wedding planner The Knot, the average spend on engagement rings is $6,351, up 25 percent from 2011 ($5,095). The average carat size of the center stone is 1.2 carats, while the average carat size for the total ring is 1.8 carats. Nearly 1 in 3 (29%) grooms report spending more than planned on the engagement ring. Seven in 10 (70%) brides know how much their partner spent on the engagement ring. Nine in 10 (90%) brides report being happy with the amount their fiancé spent on the ring; 6% wish they had spent more and 4% wish they had spent less. However, 72 percent of grooms said they faced challenges in buying a ring, including not knowing if they were getting a good deal (35 percent) and not knowing diamond terminology (28 percent).

As for all of the discourse about millennials bucking tradition, the survey revealed that they are planning the engagement process very carefully - only one in three proposals are a surprise - and embracing old traditions, such as getting down on bended knee: "91 percent of grooms are both proposing with a ring in hand and actually using the phrase, “Will you marry me?” up from 85 percent and 86 percent in 2011, respectively. A staggering 87 percent still report proposing on one knee, up from 77 percent in 2011." Kristen Maxwell Cooper, editor in chief of The Knot, said, “We’re seeing proposers put more time, thought and effort into creating the perfect proposal, as well as an engagement ring they know their partner will love. And while proposals are less of a surprise than in years past, there’s an uptick in grooms returning to time-honoured traditions." Couples said they looked at an average of 26 rings before deciding on the one. 45% of the rings purchased are custom designed, and the most popular stone cut is round (52%). The average carat size of the center stone is 1.2 carats, while the average carat size for the total ring is 1.8 carats. The most popular engagement ring setting metal is white gold (61%).

The average time spent looking for one hovers around 3.5 months (but planning a proposal is a more lengthy process - those surveyed report spending around 4.4 months devising a game plan before popping the question). The survey also notes that more and more couples are meeting online (19%), up from 14% in 2015; it also noted a rise in the purchase of engagement rings online (14%). While the majority of grooms (86%) continue purchasing rings at retailers - with nearly half (45%) preferring to buy from a local or independent jeweller - 14% of grooms purchased the engagement ring over the web, up from 10% in 2011. The average ring purchaser took 3.5 months to find the engagement ring they’d propose with, up from 3.3 months in 2011. While looking for engagement rings, 1 in 3 (33%) couples report shopping together