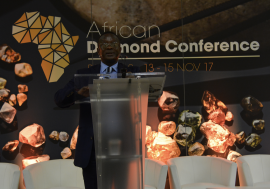 The African Diamond Conference (ADC), a joint initiative of Belgium's Federal Public Service (FPS) Foreign Affairs and the Antwerp World Diamond Centre (AWDC), took place yesterday at the Egmont Palace in Brussels. With nearly 400 in attendance, the ADC featured a broad range of speakers from across the entire diamond pipeline - from mine to finger - as well as diamond industry stakeholders. The participants included African mining ministers and ambassadors from eleven countries, the diplomatic corps, representatives from the global diamond industry, NGOs and the academic world, coming together to discuss the challenges and opportunities for African diamond-producing countries now and in the future. Topics included leveraging the diamond trade for economic development, marketing responsibly sourced diamonds to meet new consumer demands, the Kimberley Process and the potential impact of synthetic diamonds on diamond-producing countries.

Opening the conference, AWDC President Stéphane Fischler said, "Diamonds are not different than any other mined mineral or commodity. Managed properly, it will be a catalyst for economic diversification and socio-economic development. There is no question that the diamond industry contributes extensively to the improvement of local populations. But how can we do more and better?" Twenty speakers and three dedicated panel discussions entered into a day-long dialogue in the presence of the former president of South Africa Thabo Mbeki, to tackle that very question. Deputy Prime Minister of Mineral Resources of South Africa Godfrey Oliphant (pictured) illustrated the challenge, stating, "In South Africa, the legacy of diamond mining is very diverse, with much industrialization and socio-economic development emerging as a result of mining after the discovery of diamonds. But, socially and politically, the discovery of diamonds is more associated with the exploitation of diamonds. workers, impoverished communities and environmental pollution." Sadique Kebonang, Botswana's Minister of Minerals, Green Technology and Energy Security, shared Botswana's experience in dealing with such issues, having successfully developed their healthy diamond ecosystem.

Des Kilalea, a respected diamond analyst now at Canaccord Genuity London, argued that defending natural diamonds is everybody’s responsibility, including miners, host governments and the midstream of the diamond pipeline. Jean-Marc Lieberherr, CEO of the category marketing group Diamond Producers Association, unveiled their strategy for doing just that; they have set themselves the task of, "injecting deep, relevant cultural and emotional meaning into diamonds, over and beyond luxury, status, and social conventions, which is essential to the future of the sector." Their strategy is based on the realization that, "young consumers demand transparency and social responsibility - they want to buy a product/brand with a purpose." Meanwhile, Australia's Kimberley Process Chair Robert Owen-Jones outlined the KP's efforts to secure a transparent diamond pipeline. Representatives from major miners - Neo Daniel Moroka, Resident Director of De Beers, Botswana; Peter Karakchiev, Head of International Relations Department at ALROSA; Paulo M'Vika, Board Member of Endiama (Angola) - also took to the stage to offer their vision of how their respective organizations' sustainable mining operations are catalysts for socio-economic development.

Speaking on behalf of the Belgian government, Deputy Prime Minister and Minister of Foreign Affairs and European Affairs Didier Reynders said, "At the beginning of this century, Belgium joined leading forces to what was later to become the Kimberley Process. It is fair to say that, together, we have made real progress to rise to that challenge. Today, conflict diamonds account for an estimated 0,2% of rough diamonds in circulation, down from 15% back in 2000. But the race is far from run. We need to remain vigilant to sustain and further the progress that has been achieved. Today’s dialogue showcases our willingness to contribute to the ongoing reflexion about the future of the industry. I can assure you of Belgium’s commitment to advance this common agenda, and advance a sustainable and inclusive approach to natural resources management: bilaterally, through the European Union, and soon, I hope, in the UN Security Council."

The lively panel discussions were moderated by Marie-Chantal Kaninda, Executive Director of the World Diamond Council, Thomas Biesheuvel, of Bloomberg News, and diamond industry analyst Edahn Golan. Pat Dembe, Head of Corporate Affairs at The De Beers Group of Companies, interjected an inspiring comment during the final panel session: "Should African countries invest in marketing and promotion for diamonds? No, these governments should invest in their people, so their countries can be used as true, authentic examples of the positive impact of diamonds. With this kind of authentic stories, diamond marketing will become a lot easier." H.E. Alexander de Croo, Belgium's Deputy Prime Minister and Minister of Development Cooperation, the Digital Agenda, Telecommunications and Postal Services, closed the proceedings with an earnest call for continued dialogue and investment between Europe and Africa.