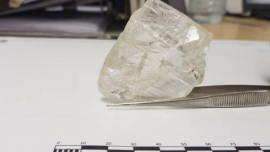 Following the unearthing of the 476.7-carat diamond, dubbed the Meya Prosperity, at the Meya deposit in the Kono District of Sierra Leone, Meya Mining announced the appointment of Koin International as the marketing and sales agent for the exceptional diamond.

According to Meya’s initial estimate, it is the 29th largest diamond ever recovered, and the fifth largest to ever be found in the Republic of Sierra Leone. Sahr Wonday, director general of Sierra Leone’s National Minerals Agency, said the latest find “provides a remarkable indication of the potential of the mineral resources” in the area. Two other special diamonds of 19.70 carats and 27.93 carats were discovered on the same day in the same area.

Sierra Leone’s Minister of Mines and Mineral Resources, Minkailu Mansaray, remarked that “Koin seems to know exactly what we want from this remarkable diamond – the best price, prosperity and great publicity for our diamonds and country. And so in the end, it was an easy decision." Mr. Adam Schulman, CEO of Koin International was excetionally pleased with the appointment, and stressed that this “not only represents an opportunity to ensure that Meya Mining and the Sierra Leone government derive as much value as is possible from this diamond. We also see it as an opportunity to showcase Sierra Leone, its people and its rich natural resources. That is exactly what we will strive to achieve."