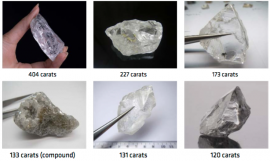 Australian junior miner Lucapa Diamond Company and its partners, recovered a 129.58 carat rough diamond from the Lulo Diamond Project in Angola, the eight stone above 100 carats since commercial production started in 2015.

“These localized recoveries, and other indicators, point to the huge potential of a large stone primary kimberlite source at Lulo,” said Stephen Wetherall, Managing Director, Lucapa. He added that the latest gem-quality diamond recoveries reinforced the extraordinary nature of the Lulo diamond field and its exciting large-stone kimberlite potential. Lucapa is attempting to identify the kimberlite from which these large diamonds originated. At present the Lulo deposit is an alluvial mine, which means the diamonds located there have been washed away from their source.

What is remarkable is that the eight +100 carat diamonds which were recovered to date at Lulo originate from three different alluvial mining areas – Mining Blocks 6, 8 and 28 – spanning approximately 6km along the Cacuilo River. “We continue to assess ways to speed up this systematic drilling and sampling program – an approach we believe provides the best opportunity to unlock Lulo’s true value,” concluded Wetherall.

The largest of Lulo’s +100 carat diamonds discoveries, the 404 carat 4th February Stone, which Swiss Jeweler De Grisogono cut into an emerald-cut, 163.41-carat, D-color, flawless polished stone, will be up for sale at Christie’s Geneva auction later today. The auctioneer described the stone as the largest D-color flawless cut diamond ever to be put up for auction.