BlueRock Diamonds Achieves Record Sales of $226K at $337 Per Carat in S.A. 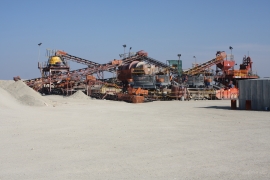 BlueRock Diamonds plc, which owns and operates the Kareevlei Diamond Mine in the Kimberley region of South Africa, achieved record monthly sales in October 2017 of US$226,400 (ZAR 3.25 million), also achieving a record monthly number of carats sold at auction of 609.84. The October parcel was sold at an average of US$371.25 per carat, compared with the average price realised for the first 9 months of 2017 of US$336.65 per carat. The diamonds produced and included in October’s sales tender resulted in a grade of 2.64 cpht. The average grade for total production in the third quarter was 2.49 cpht vs 1.59 cpht for the first half of 2017.

BlueRock's operations were affected by rainfall in the early part of the month which caused approximately 5 days of production to be lost. Production in October was therefore approximately 17,000 tons compared to 22,010 tons in September. Production has returned to normal levels and steps have been taken to mitigate the effect of similar amounts of rain in the future by introducing plant to produce a stockpile of covered material available for processing during rainy periods. Blasting and processing of the Level 2 kimberlite has now commenced; it is expected that the level 2 kimberlite will, on average, yield higher grades than that achieved from the Level 1 kimberlite that the Company has been processing for the last few months.

Adam Waugh, Chief Executive Officer of BlueRock Diamonds, commented: “Our October tender result continues to show the high quality of Kareevlei diamonds. The average price of US$371 per carat was achieved without any exceptionally large diamonds, the largest being 5.5 carats. We have been able to demonstrate that the mine can be operated on a profitable basis and our team are now concentrating on sustainable improvements to production whilst we start to mine the expected higher grade ore.” BlueRock Diamonds was established in 2012 to acquire or invest in underexploited diamond mines in South Africa and sub-Saharan Africa. BlueRock was admitted to trading on AIM September 2013. Currently, BlueRock has the mining right to and operates a mine at the Kareevlei Tenements which covers 3,000 ha., contains five diamondiferous kimberlite pipes and has an inferred mineral resource of 359,000 carats.