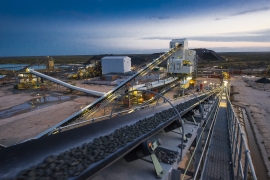 Vancouver-based Lucara Diamond with operations in Botswana made several announcements yesterday (Nov. 2), starting with news of its positive Preliminary Economic Assessment for taking its Karowe Mine underground, which would extend the life of the mine another ten years to approximately 2036. The study examined the feasiblity of commencing production of an underground mine after the depletion of the current open pit Karowe Mine, and returned a total Life-of Mine (LOM) production estimate of 2.72 million carats over a ten-year period, or 272,000 anually, with an after-tax undiscounted net cash flow of $820 million. Since declaring commercial production in July 2012, the Karowe Mine has produced an average of 320,000 carats anually from three kimberlite lobes. These open pit operations are scheduled to continue until 2026 with the originally planned processing of low grade stockpiles in 2027 being moved to 2036, the end of the current planned underground operations.

William Lamb, President and CEO, stated, "The results of the PEA demonstrate the potential economic viability for the development of an underground mine at Karowe. Underground operations are focused on the high value south lobe, which remains open at depth below the current design, and is a further indication of the potential longevity of the resource and cashflow generation at Karowe. We have seen on-going improvement in the value of diamonds from the south lobe and the development of an underground mine has the potential to add significantly to the Life of Mine at Karowe." They note, however, that the PEA is preliminary in nature and includes the use of the Inferred Mineral Resource which is considered to be too speculative geologically to have the economic considerations applied to it that would enable it to be categorized as a Mineral Reserve.

Production levels somewhat disappointed in Q3 due to a longer than anticipated ramp up of its new mining contractor, Aveng Moolman, and contractor operating inefficiencies - which are being addressed and improved, they said. The processing of lower grade stockpile has caused a decrease in carats recovered and forecast carats sold, which are now between 260,000 to 270,000 carats compared to initial guidance of between 290,000 to 310,000 carats. Nevertheless, the south lobe ore mined continues to meet expectations in terms of both grade and sales prices achieved, as Lucara reported a very strong price per carat during the quarter. Even without the boost provided by the the sale of the Lesedi La Rona for $53 million during the quarter, Q3 average sales price were $389 per carat (excluding the sale of the Lesedi La Rona), or 17% higher than Q3, 2016. Year to date average sales price of $687 per carat (excluding sale of Lesedi La Rona), 11% higher than year to date 2016 (excluding sale of Constellation diamond).

During the quarter, Lucara recovered 108 specials (+10.8 carats), including two poor quality stones in excess of 100 carats, equating to a 4.1% weight percentage of recovered carats. The mining issues noted above led to a reduction in carats being recovered during the year as lower grade stockpile has been processed in place of fresh south lobe ore. "Performance is improving", they note, but the reduction in carats processed has resulted in revenue guidance being lowered to between $165 million and $175 million, excluding the sale of the Lesedi La Rona. "This does not reflect on the value of the Karowe resource as the south lobe diamonds sold in 2017 have increased in price compared to each of the past four years, and the weight percentage of specials (+10.8 carats) recovered remains strong and firm at 5.0% for the year."