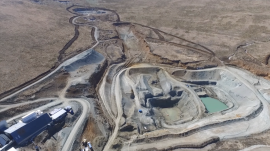 Lucapa Diamond last week adopted a new development plan for the high-value Mothae kimberlite diamond project that foresees increases in targeted production, cash flows and mine life. The improvements to targeted production and cash flows include: a 22% increase in diamond production to 498k carats, a 30% increase in kimberlite material mined to 25 million tons and a 12% increase in mine life to 13.5 years. Lucapa earlier announced it had secured a US$15 million facility to fund the Phase 1 Mothae development from Equigold Pte Ltd, and recently announced the Government of Lesotho has agreed to assist with the additional up-front investment by deferring the remaining consideration payments on the US$9 million purchase price of the Company’s 70% interest in Mothae. They had already paid $4.5 million of the $9 million and was due to pay the US$4.5 million balance starting in October 2017, but this will now commence in June 2018.

Lucapa Managing Director Stephen Wetherall said, “Mothae was already a compelling project and the optimised mine plan is set to enhance both the economics and production profile, targeting improved returns for all direct and indirect stake holders in the project. We now look forward to bringing Mothae into production early in the second half of 2018 to add a high- value kimberlite production source to our exceptional Lulo alluvial production.” Concerning the Lulo project, Lucapa today (Oct. 30) announced that it intersected Kimberlite in four targets along river tributaries feeding into its most productive site, Mining Block 8 alluvial area, which has an average recovery size of 1.87 carats, and from where diamonds worth US$61 million have been recovered and sold to date, including their largest, 404-carat stone. The drilling program will continue throughout the December Quarter.

The company adds that a total of 444 Special diamonds weighing 13,337 carats - accounting for 87% of Specials recovered to date and including 7 +100 carat diamonds and 48 +50 carat diamonds - have been extracted from four mining blocks in and around the prolific Mining Block 8. The diamond recoveries in this area totalling approximately US$80m are highly unusual, which is why this area and the areas directly upstream of these finds remain the focus of the kimberlite drilling program. Wetherall commented, "“It is very encouraging that we are discovering new kimberlite pipes in river tributaries feeding into our Mining Block 8 alluvial area."