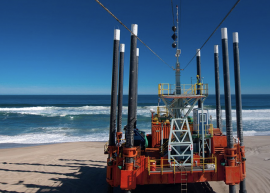 Namdeb, a 50/50 joint venture between the Namibian government and Anglo American’s diamond unit De Beers plans to close four mines by 2022 in the southern African country, reports Reuters following a statement made by a union official in a local newspaper. The Namibian Sun quoted Mineworkers Union of Namibia Oranjemund branch chairperson Mbidhi Shavuka as saying “We understand that it is the nature of the resource; diamonds are finite." The mines affected are Elizabeth Bay Mine, which will be shut down at the end of 2018, Daberas at the end of 2019, Sendelingsdrift in 2020 and the main one, Southern Coastal, in 2022, Shavuka said.

Namdeb corporate-affairs manager Pauline Thomas told Rapaport News that Elizabeth Bay and Daberas mines are “well beyond their original planned life of mine", adding, "We are constantly investigating new mining opportunities, however it is equally important that we plan responsibly for the possible closure of operations that reach the end of their economic life span.” In June, De Beers launched the world’s largest diamond exploration ship to operate off the coast of Namibia, as the diamond producer looks for higher-value gemstones as many of the major onshore deposits have now been depleted. Debmarine Namibia is the only company in the world to mine diamonds offshore, having started in 2002. The company produced around 1.2 million carats in 2016. Namdeb's production in Q3 2017 increased 12 percent to 454,000 carats primarily as a result of higher mining rates from Debmarine Namibia’s Mafuta vessel.