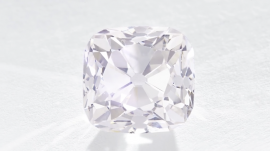 A legendary 19.07 carat pink diamond of historic Royal French provenance will be offered for sale at Christie’s Magnificent Jewels auction in Geneva on 14 November 2017, the auction house reports in a press release. The magnificent stone has been in the collection of four kings, four queens, two emperors and two empresses, starting with the Sun King, Louis XIV. It is one of France’s most storied gems, with three centuries of royal provenance.

The diamond known as the Grand Mazarin (click link for more details) originated in the Golconda mines in South Central India. These mines are legendary for having produced some of the most important diamonds in history - including the Koh-i-Noor, the Regent Diamond and the Wittelsbach-Graff, all famous for their exceptional clarity. Le Grand Mazarin was first recorded in the 17th Century holdings of Cardinal Mazarin, an Italian cardinal, diplomat, and politician, who served as the Chief Minister to Kings Louis XIII and Louis XIV, and for whom the diamond is named. Toward the end of his life, Mazarin assembled a collection of 18 exceptional gems. Purchased from the royal families of Europe or sourced from the jeweller Lescot, they were the most beautiful jewels on the Continent. Upon his death in 1661, he bequeathed Le Grand Mazarin to Louis XIV, together with the famous Mazarin diamonds including the Sancy which is now at the Louvre Museum; it remained in the French Crown Jewels for the next 225 years.

“LE GRAND MAZARIN, a legendary 19 carat pink diamond, is a unique testimony of French History. During its 250 years in the French Crown Treasury, it was set in the spectacular jewels of no less than 4 kings, 4 queens, 2 emperors and 2 empresses, starting with the Sun King, Louis XIV. An exceptional gem from the Golconda mines, LE GRAND MAZARIN is also the diamond with the most prestigious and historic provenance still to be in private hands. It is an extraordinary privilege for Christie’s to lead LE GRAND MAZARIN to its new home during our Geneva auctions in November,” commented François Curiel, Chairman Christie’s Europe & Asia. The diamond has been exhibited at Christie’s London and will be at Christie’s New York on 6-7 November. Starting on 9 November, the Geneva pre-sale exhibition will be taking place at the Four Seasons Hotel des Bergues, with the diamond finally being offered on the evening of 14 November in the Magnificent Jewels auction. Christie's has not put an estimate price on the diamond, but the historic stone is expected to fetch up to $9 million.