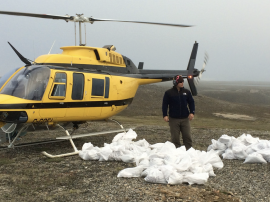 Last June, North Arrow Minerals - a Canadian based exploration company focused on the identification and evaluation of diamond exploration opportunities in Canada - announced the start of a $3.2M exploration program at the company’s 100% owned Naujaat and Mel Diamond Projects, Nunavut, Canada. At the Mel Project North Arrow, they were going to conduct detailed prospecting and geophysical surveys of high priority kimberlite indicator mineral (KIM) targets, and have now announced the discovery of the ML-8 kimberlite. A 62.1 kg sample of the ML-8 kimberlite has returned 23 diamonds larger than the 0.106 mm sieve size, including a single, colourless diamond larger than the 0.85 mm sieve size.

Ken Armstrong, President and CEO of North Arrow commented, “As we thought possible, detailed prospecting of the well-defined KIM trains at Mel has led to the discovery of kimberlite and diamonds - the second discovery by North Arrow of a diamondiferous kimberlite field in Canada. Delineation and exploration drilling of the ML-8 discovery and other identified targets is now planned for 2018 and will benefit from sharing logistics and infrastructure with North Arrow’s ongoing evaluation of the Q1-4 kimberlite at the Naujaat Diamond Project.” The Mel property is located within 18 km of the Arctic Ocean. Mr. Armstrong continued, “The presence of two diamonds greater than 0.6 mm in this small sample is highly encouraging and these initial microdiamond counts compare favourably with results from the diamondiferous Aviat and Naujaat kimberlite fields." North Arrow has plans in place to mobilize an exploration drill and camp to Mel in the spring of 2018.