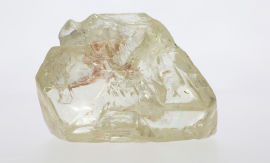 The Government of Sierra Leone has appointed the Rapaport Group as the marketing and sales agent of the "Peace Diamond". The 709-carat diamond, discovered by a local pastor and diamond digger in the village of Koryardu, is the third-largest diamond ever found in Sierra Leone and the 13th-largest ever to be unearthed. The Peace Diamond is special because it is a development diamond, Rapaport said in a statement. Over 50% of its sale value will directly benefit the community where the diamond was discovered and the people of Sierra Leone. “The Peace Diamond will greatly improve the lives of our people as it will bring clean water, electricity, schools, medical facilities, bridges and roads to our villages and the Kono District. This diamond represents our hope for a better future as the resources of Sierra Leone fund growth, development and jobs,” said Pastor Emmanuel Momoh, the owner of the diamond. The State will receive 15% in royalties on the sale, and 30% of the sale price in taxes. The Rapaport Group is offering its services free of charge, with the goal being to attract multiple bidders and achieve fair market value to help the people of Sierra Leone.

Discovered in March 2017, and amid early speculation that the diamond could be worth as much as $50 million, a first attempt was made last May to sell the diamond in Sierra Leone, but the government was underwhelmed with the bids - a $7.8 million bid failed to match the government's unspecified reserve price. After the failed initial auction, the Sierra Leone government has now called on the services of the Rapaport Group which, as stated in their press conference on Tuesday, will be counting on the "powerful marketing message" that the sale of the diamond will directly benefit the people of Sierra Leone, to create added value for the stone.

During their press conference, Martin Rapaport told journalists repeatedly that the beauty of the stone went beyond its physical characteristics. "The diamond's physical characteristics are what they are," he said, emphasizing that, "This is much more than just a diamond. The thing that's going to make it beautiful and special, and create added value, is the benefit it will bring to Sierra Leone." Furthermore, Rapaport hopes the transparent sale of the big diamond will legitimize the process of selling diamonds in the country and encourage small-scale miners to bring the diamonds they unearth to the government so everyone will benefit. Between 1991 and 2002, the Kono district where the diamond was found was at the center of the “blood diamond” trade that funded the country’s brutal civil war as rebel groups exchanged gems for weapons. Those days are gone, but the artisanal sector is still in need of formalization, and the Group hopes the sale of "The Peace Diamond" will help generate newfound trust that the wealth from the country's diamonds will flow back to the people.

Despite the very noble intentions of the Rapaport Group, however, the big question that remains is about the quality of the diamond. Martin Rapaport did not shy away from these concerns, admitting, "It is hard to ascertain the quality of the diamond. It actually has several diamonds hiding inside it, with areas of cleanliness and clarity. This is one of the most complicated diamonds in the world. There are many different opinions about what can come out of it physically. I can't say it's really high quality. It's problematic." But it is also very large, so he anticipates several large polished diamonds will emerge. Ultimately, however, "It is up to diamond experts to figure out what to do with it," adding, "The real beauty of this diamond is its role." They are counting on their message to deliver value, and believe that people will want a piece of the "Peace Diamond", knowing that their purchase has really done some good.