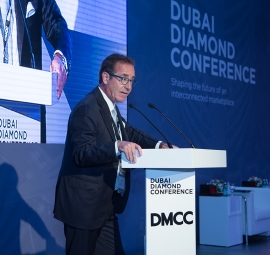 Speaking at the opening day of the Dubai Diamond Conference, at the Dubai Multi-Commodities Centre (DMCC), Peter Meeus, Chairman of Dubai Diamond Exchange (DDE) said the Value-Added Tax (VAT) set to be introduced in the UAE from next year could deal a crippling blow to Dubai's loose diamond trade. “The possible cost implications of a VAT introduction for UAE traders are huge,” Meeus said. “Winter is coming,” he added, "because in a business where profit margins are very thin, every quarter of a per cent is important to traders handling billions of dollars to decide where to ship." He further warns, “The announcement of possible VAT on loose diamonds would strongly jeopardise” the progress Dubai has made as a trade center.

The UAE is set to introduce five per cent VAT on a host of services and goods from January 2018 as part of the Gulf Cooperation Council agreement. Along with the UAE, Saudi Arabia will also impose VAT from next year while other Gulf states will implement it at a later stage. Addressing the Dubai Diamond Conference, DMCC's executive chairman Ahmed bin Sulayem urged authorities to be cautious in order to avoid shifting of businesses from the UAE as a direct fallout of VAT. "The introduction of VAT here in the UAE next year - though lowest in the world - leaves our member companies and even industry generally concerned. There is a sincere feeling of uncertainty ... This sends a very negative message if it becomes a reality. Diamonds and gold are critical for Dubai, jointly accounting for $75 billion annually," Bin Sulayem said, cautioning the tax authorities to be kind on the industry. "It will take several decades to restore market confidence. Therefore, we strongly urge our tax authorities to take this matter seriously and help us create certainty about our future," the DMCC chief said.

Meeus is concerned that the imposition of the VAT could undo Dubai’s growth as a diamond hub over the last 15 years - from $300 million (Dh1.10 billion) in trade in 2002 to $26 billion in 2016, putting it behind only Antwerp and Mumbai. "If this challenge is not solved, all that we have done in the last 15 years will have been for nothing", he said. "Places like Hong Kong, Panama and Singapore will be considered alternatives if value-added taxes were to be put on loose [diamonds].”

Rapaport News' Avi Krawitz today reports Peter Meeus is stepping down from his position as chairman of the Dubai Diamond Exchange (DDE), effective on January 1. He will be replaced by Ahmed Bin Sulayem, who heads DDE’s parent body the Dubai Multi Commodities Centre (DMCC). Meeus told Rapaport News. “I feel my job is done and it’s time for me to work on other challenges.” Meeus will also end his tenure as special adviser on diamonds to the government of the United Arab Emirates (UAE), a role he’s held for 12 years and that included his work as DDE chairman.