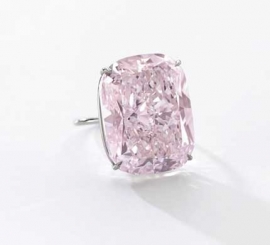 Sotheby’s will be presenting ‘The Raj Pink’, claimed to be the world’s largest known Fancy Intense Pink diamond, weighing 37.30 carats, at its auction of Magnificent Jewels and Noble Jewels in Geneva, on 15 November 2017. Its estimate is $20 million - $30 million. “The discovery of any pink diamond is exceptional, but the Raj Pink’s remarkable size and intensity of colour places it in the rarefied company of the most important pink diamonds known,” says David Bennett, Worldwide Chairman of Sotheby’s International Jewellery Division. The rough diamond which yielded ‘The Raj Pink’ was studied for over a year after its discovery in 2015. It was then entrusted to a master cutter, who brought the diamond’s innermost beauty to full display by crafting it into a sparkling cushion-modified brilliant cut.

The Raj Pink should not be confused with the Pink Star, a 59.60-carat oval mixed-cut Fancy Vivid Pink Internally Flawless diamond, which sold for US$71.2 million (HK$553 million) on 4 April 2017 in Hong Kong. In doing so, Sotheby’s set a new world auction record for any diamond or jewel. The Pink Star was acquired by renowned jeweller Chow Tai Fook.

The Gemological Institute of America (GIA), which certified the diamond, characterized the Raj Pink as an “astonishing stone”, describing its hue as “a very bright and ravishing fancy intense pink color”. It continued, “For a diamond to display strong, unmodified pink color like that observed in The Raj Pink is rare, particularly at so considerable a weight”. The discovery of a gem-quality pink diamond of any size is an extremely rare occurrence. Of all diamonds submitted to the GIA each year, less than 0.02 per cent are predominantly pink. “Only on the rarest occasions do diamonds with vibrant, shocking color like the Raj Pink’s emerge… only the most privileged and knowledgeable in the industry know of their existence. With an unmodified Fancy Intense Pink hue, substantial size and desirable clarity, the Raj Pink is certainly one of those gems that only few may have the honor of experiencing.” - Gemological Institute of America