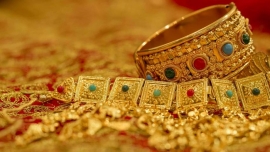 India's jewelry sector can breathe a little easier after Friday's announcement of the removal of gems and jewelry from the scope of the Prevention of Money Laundering Act, writes The Hindu Business Line. The sector has been hit hard by the dual impact of demonetisation and the Goods and Sales Tax (GST). Following the move, jewelers no longer need to verify the identity of their clients by a KYC process for every transaction of Rs. 50,000 ($765) or more made through a single or multiple transactions. The move is expected to boost gold jewelry demand during the festival season - particularly in rural areas. Furthermore, dealers in precious metals, precious stones and other high-value goods, with annual turnover of more than $306,000 (2 crore, or INR 20 million), will no longer have to report transactions as stipulated under the Act. It appears, however, that this move is but a temporary respite pending futher, permanent regulations.

Bloomberg reported yesterday that, "Shares of jewelers climbed in India after the government withdrew an order that brought the industry under anti money-laundering legislation, a move that comes just as gold buying improves before the Hindu festival of Diwali, the peak season for demand ... Buyers have been shying away from making purchases as they had to provide their income tax identity for transactions above 50,000 rupees ($766), hindering high-value deals. Titan Co. advanced as much as 5.7 percent to 630.40 rupees in Mumbai, the biggest jump since Aug. 4, while Tribhovandas Bhimji Zaveri Ltd. was up 8.1 percent and Gitanjali Gems Ltd. added 6.9 percent."

Nitin Khandelwal, Chairman of the All India Gems and Jewellery Trade Federation, said over the past 20 days preceding Friday’s meeting of the Goods & Services Tax Council, the association had been lobbying at each and every department and with key personnel in the government, and enjoyed great support from various associations and chain store owners. He said with the new relief from the strict compliance rules, the industry looks forward to good business during the festival season. “We will see the mid-sized, high-value purchases coming in now and sales will be better-than-expected during Diwali and the wedding season after that.”