ALROSA Estimates $170-200M in Losses from Mir Mine Accident 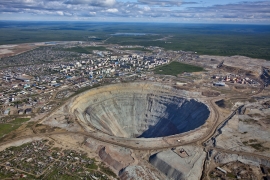 ALROSA has estimated losses from the Mir mine accident to amount to $170-205 million (10 billion-12 billion rubles), the diamond miner's CEO, Sergei Ivanov, told Russian media on Friday. "We are currently watching the situation closely where equipment is concerned. Some things are clear - there is underground equipment where the flooded mine workings are concerned, and again, we're working with the insurance company. The losses there I think are around 10 billion-12 billion rubles. The most terrible thing is that people died there, the money is secondary," he said. "All the insurance claims will be paid. There are also the lost gains, of course, which cannot be insured and which will deliver a certain blow to the company," Ivanov said. He said the accident would not affect production for the year. Mir produced 11% of Alrosa's diamonds in H1 2017.

The August 4 accident at Mir completely destroyed mine workings and equipment and flooded two levels. There were 151 miners inside the mine at the time of the accident, and 143 of them were rescued. The search-and-rescue operation at the Mir mine lasted for a total of three weeks. ALROSA sales in 2017 will be on par with the level of production of just over 39 million carats, Ivanov told journalists. "We have been prevented from sales at levels close to 40 million carats this year. It will be slightly higher than 39 million carats, as we had said originally. If it hadn't been for the accident, we could have shown a little more, but nonetheless we are higher than the plan, this is a good result," he said. The diamond miner sold 5 million carats more than the level of production from its reserves in Q1 amid a revival in demand and announced an increase in its preliminary sales forecast for the year to 39 million carat. Following the accident at the Mir mine in August these plans had to be abandoned and the new forecast has yet to be announced. A number of investment banks had predicted that 2017 sales could surpass 41 carats through new sales of some inventory.