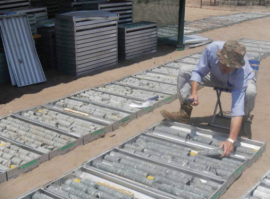 Last week Friday, junior miner Botswana Diamonds said sampling work at its Ontevreden licence in South Africa, "produced abundant G10 and G9 garnets with a complimentary suite of eclogitic garnets," noting that, "This mix of garnets is typically seen in a high-grade kimberlite pipes. This work follows detailed ground geophysics which identified ... Ontevreden as a Group 2 kimberlite.  The next step is to drill the kimberlite and this is planned for later in the year." Mining.com reported that shares in the miner received a solid boost after the announcement, and have have gained almost 12% for the year thus far.

The Ontevreden kimberlite pipe is close to Petra Diamonds' Helam Mine, which has grades in excess of 500cpht and a diamond value of US$255/ct at a +1mm bottom cut off. John Teeling, Chairman, commented, "The exciting new kimberlite discovery at Ontevreden continues to entice. Samples from the surface contain significant quantities of G10 and G9 garnets - high quality diamond indicator minerals frequently found at high-grade kimberlite pipes." Botswana Diamonds operates the site in a joint venture with Vutomi Mining.