Petra Diamonds’ Mineworkers Back To Work As Wage Dispute Ends 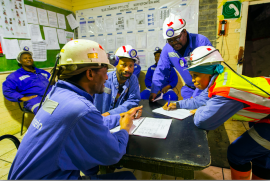 Petra Diamonds Limited announced on Thursday that it has reached agreement with the National Union of Mineworkers (NUM) with regards to salaries at the Finsch and Koffiefontein operations in South Africa and employees will report for their normal duties on 29 September 2017. A day later, Petra announced the Kimberley Ekapa Mining JV operation has signed the same three year wage agreement as that already signed by the company's other South African operations. The mine will now revert to normal operations following conclusion of the labour disruption. The Cullinan mine was not impacted by the labor disruptions.

The three year wage agreement with NUM provides for annual increases to NUM members in the region of 9 to 10% for year one and 8.5% for years two and three. However, given lower wage increases for other levels of employees within the Group, the overall wage inflation for the Company is ca. 7.5% per annum. There is no material impact to Petra's cost guidance for FY 2018. Petra also said it does not expect there to be a material impact on Group production guidance of 4.8 to 5.0 million carats for FY 2018.