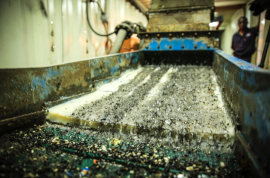 London-listed Petra Diamonds said on Wednesday it had received authorization from the Tanzanian government to resume diamond exports and sales from the Williamson mine. Shares in Petra Diamonds climbed more than 12% from two-year lows following the annoucement. The company said the timing and process for the next diamond export to the company’s office in Antwerp and the sale would be finalized between the company and the government. Petra said no resolution had been reached over the 71,654.45 carat shipment from the Williamson mine that was blocked for export this month. Nonetheless, the announcement clears at least one of the hurdles Petra has encountered in the past weeks, as it means it might not breach its banking covenants as previously anticipated.

Reuters writes that, "New laws and a crackdown on mining firms in Tanzania has slowed fresh investment in what has long been seen as one of Africa’s brightest mining prospects as firms assess the government’s efforts to secure a bigger take from the sector. Tanzania passed three laws in July that, among other things, hike taxes on mineral exports, mandate a higher government stake in some mining operations and force the construction of local smelters to add more value to the country’s mining industry. The regulations aim to stamp out what President John Magufuli has called years of corrupt practices and tax evasion which he said has robbed the country of revenue from a sector accounting for about 4 percent of GDP." The troubles Petra has faced in Tanzania mirror those encountered by Barrick Gold-owned Acacia Mining, which has been the centre of a gold export probe launched by Magufuli earlier this year. The investigation has taken such heavy toll on Acacia - one of Africa’s largest gold producers- that the company decided earlier this month to reduce operations in the country.