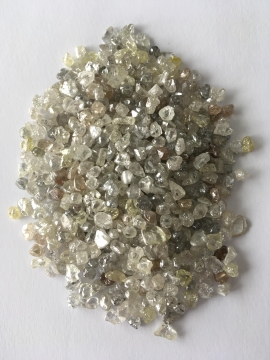 GIA senior industry analyst Russel Shor, in his recent article, "Diamond Producers Aim for Lower Qualities in Today’s Market", explains how sophisticated mining techniques enable major diamond miners to target their drilling to meet polished diamond demand. He notes that the average value of rough diamonds mined last year fell significantly according to the latest Kimberley Process (KP) data, with global diamond production of 134 million carats valued at $12.4 billion in 2016, or just under $92.50 per carat. That is in comparison to 127 million carats valued at $13.9 billion, at $109 per carat, in 2015. This is not, he says, a coincidence, as, "diamond demand in major consumer markets, such as the U.S., China and Japan, has trended toward smaller stones and lower qualities."

"The major mining companies," he writes, "like to say they dig and sell whatever nature gives them, but technology has given them a way to tweak nature’s generosity", and they, "are doing just that - concentrating their mining on lower quality areas." He explains: "Thanks to highly sophisticated computer modeling technology, geologists at diamond mining sites can better pinpoint specific areas by continually taking core samples using the data to model the diamond distribution within the kimberlite pipe and adjust their production accordingly. The makes it possible for the diamond miners to be more profitable. They can keep production going at the most efficient levels, with less stockpiling of goods for which there is slow demand." And this is only good business practice, as there has been, "a definite shift in demand toward smaller diamonds and lower qualities. China, for example, which had not favored SI and I1 clarities, began to embrace them as consumers sought to keep expenses down ... luxury buyers in China have become much more price sensitive and much more knowledgeable in the past few years." An interesting take on the way miners are meeting demand, rather than steering it.