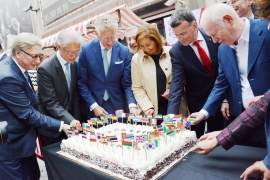 The Antwerp World Diamond Centre today organized a festive launch of the Diamond Year celebrating 570 years of unbroken diamond trading in the city, sealing its place as the diamond capital of the world. The celebration was attended by Belgium's Secretary of State for Foreign Trade Pieter De Crem, fifteen ambassadors from diamond-related countries and featured 57 cakes - one for each decade of diamond trading in Antwerp, and, coincidentally, one for each facet of a brilliant cut diamond. The Diamond Year, which runs from now through June 2018, is a collaborative effort by the AWDC and City of Antwerp. It will feature a range of events and initiatives to bring the diamond trade into closer contact with the local population and bolster its profile internationally, with events such as the African Diamond Conference on November 14. It also encompasses the start of the EU Chair of Kimberley Process 2018, the meetings for which will be hosted in Belgium.

AWDC simultaneously issued a press release verifying that Antwerp is still the most important trade center for rough diamonds, a fact demonstrated clearly by the 2016 annual statistics from the Kimberley Process. For many diamond producers, Antwerp continues to be the preferred trade center for marketing their goods. More than a quarter of the world’s diamond production comes directly to Antwerp to be traded. India, the most important manufacturing center, has a 19% share of global trade. The United Arab Emirates is the third largest trade center, receiving 16% of global production. It states, "Antwerp thus remains the undeniable global leader when it comes to diamond trading. This is a result of, on the one hand, the extensive knowledge and experience that Antwerp has built up over the last 570 years, but can also be explained by the fact that its 1,700 companies ensure a competitive market with tremendous opportunities. Additionally, Antwerp is also a highly innovative trade center. For instance, it was the first trade center that fully committed to implementing a tender system."

Antwerp also implements a proactive policy in which it makes extensive contacts with emerging diamond producers such as Brazil, by means of conducting trade missions to expand its network. At the same time, it makes great efforts to maintain its contacts with existing diamond producers, such as Russia. This strategy has resulted in the commitment of three major new mines to sell their rough diamond production in Antwerp. It concerns, among others, the Renard Mine and Gahcho Kué Mine in Canada, but also the Liqhobong mine in Lesotho. Together, these three mines produce some eight million carats in diamonds, of which five million are traded on the Antwerp market.