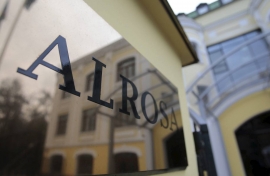 ALROSA has appointed Vladimir Marchenko as Vice-President, starting from September 20. In this capacity he will be responsible for the company's activities in Africa. Before joining ALROSA, Vladimir Marchenko was the president of Pan African Metals Corporation. ALROSA president Sergey Ivanov commented, "ALROSA is dynamically developing activities in the African continent. The company has already reached agreements on increasing the share in Catoca Ltd. Mining Co. in Angola and plans to participate in the operation of the new large Angolan deposit 'Luaxe'. Furthermore, ALROSA actively participates in geological exploration in Angola and Botswana, and we still consider, that the countries of southern Africa have a great potential for discovering new deposits. I am sure that Vladimir Marchenko's experience and professionalism will help the company to achieve desired goals."

ALROSA is a co-founder of Catoca Ltd. Mining Co. with the 32.8% share in the authorized capital; by the end of the year it will increase it to 41%. Catoca mines diamonds at the Catoca pipe - the fourth largest pipe in the world. Through Catoca, ALROSA also plans to participate in the development of the Luaxe concession (the Luele pipe), which also claims to be one of the largest in the world. ALROSA and Angola’s national diamond-mining company ENDIAMA have been carrying out geological exploration in Angola as part of a joint venture since 2014. The second priority area for ALROSA is the Republic of Botswana where Sunland Minerals, a joint venture between ALROSA and British company Botswana Diamonds Plc, operates. Currently the companies are exploring four areas in order to discover primary diamond deposits and get licenses for their development.