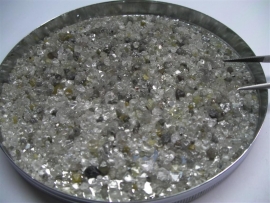 Stellar Diamonds, a London-listed junior miner, is currently seeking funding for its Tongo-Tonguma diamond project in Sierra Leone, which it says will be the first major mining project since the Ebola crisis rocked the country’s economy. Reuters writes, "Trade in diamonds helped to fuel the decade-long conflict that ended in 2002, but since the lifting of a ban on exports in 2003 and strict international rules, the industry says Sierra Leone’s exceptionally high quality diamonds have become a force for good." Stellar CEO Karl Smithson said in an interview that, “This is the first large-scale mining license to be issued by the government since Ebola, creating up to 1,000 jobs,” which would be a solid boost to a economy ravaged by the 2015 epidemic.

Initially, Reuters writes, Stellar Diamonds planned to buy the diamond prospect through a reverse takeover to acquire acreage from private firm Octea, which already operates Koidu, the biggest diamond mine in Sierra Leone and West Africa. At the time, Smithson said,"Once in production the combined diamond mining operations will be the second largest in West Africa with an estimated maximum output at full production of approximately 250,000 carats per year of high value diamonds [now stated at 200,000]. The high grade and high value nature of the kimberlites to be mined are compelling and the combination of operations should provide meaningful cost synergies that will enhance Stellar’s projected operational margins. Using the available infrastructure at Tongo and Tonguma, we expect diamond mining operations to commence within the first 12 months post completion of the Proposed Transaction.” However, the reverse takeover never went through, so Stellar switched to a profit-sharing deal with Octea, whereby Stellar will pay a 9.3 percent gross royalty to Octea, which continues to own the Tonguma prospect, while Stellar keeps the adjacent Tongo acreage and operates both.

The current project prospectus claims a 21 year life of mine, targeting production in Year 1 with potential to ramp up 200,000 cts by end of Year 3, and US$45 million gross revenue per annum at full production. To provide working capital, meanwhile, the company on September 11 announced the completion of a placing to raise gross proceeds of nearly $450,000 (£330,000) through the issue of new Ordinary Shares of the Company, as well as another $270,000 (£200,000) via an Open Offer through the issue of up to 6,153,846 Open Offer Shares. Stellar expects to raise cash from a deal agreed earlier this year to sell its assets in Guinea to BDG Capital Limited, although Smithson said the final price would be less than the $2 million figure initially announced.