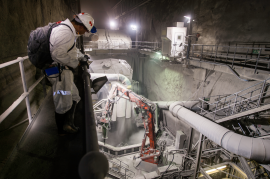 As the company had already warned, Petra Diamonds is currently facing strikes from workers at two of its mines in South Africa prior to the finalisation of its new wage agreement for its operations in South Africa, the company announced in a press release. Petra confirms that since last night it is, "experiencing labor disruption at its Finsch mine and there is also disruption underway at its Kimberley Ekapa Mining JV operations." Reuters adds that members of South Africa’s National Union of Mineworkers (NUM) are on strike over pay, regional secretary Cornelius Manhe said, after more than 600 members downed tools on Monday. Petra further states, "although underground and surface mining have been affected, plant treatment is continuing at near normal capacity at both operations treating surface material and available stockpiles. Normal operations are continuing at Cullinan and Koffiefontein, the company's other two mines in South Africa."

Petra says it, "is in ongoing discussions with the National Union of Mineworkers in order to resolve the situation and is closely managing the situation to ensure the least possible impact on Group production." They also said on Monday that mining operations had resumed at its Williamson mine in Tanzania after a four-day stoppage following the seizure of a parcel of 71,654 carats of rough diamonds destined for Antwerp. They are unable to say if or when the Tanzanian authorities would allow that parcel to be exported, but say that its full-year production target remains unchanged. Nevertheless, the financial markets have not taken warmly to the latest news.

Image: Drill and Blast Engineer observing the operation of the rock breaker in the 61 Level crusher chamber at Finsch mine, South Africa