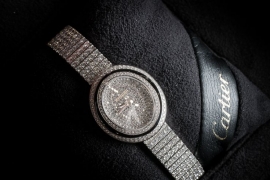 Richemont, the second largest luxury goods company in the world, announced sales had jumped during the April-to-August period as a result of Asia's strong performance.

The double-digit sales growth was primarily driven by the companies “Jewelry Maisons” — Cartier and Van Cleef & Arpels — which had risen 16% year-on-year during the five month period. In the meantime, Richemont’s specialist watchmakers, including Jaeger-LeCoultre, Vacheron Constantin and Piaget, rose by 6%. Based on the report the increase at the Jewelry Maisons was one of the main factors behind Richemont’s overall 10% sales hike.

Sales, led by Asia Pacific, increased in all regions. The strong performance was supported by double digit increases in most markets including China and Hong Kong. Richemont explained that this was partially due to the exceptionally weak numbers the previous year, when the company bought back inventory from retail partners that were overstocked. The 3% growth in Europe reflects contrasted performances within the region as well as the negative impact of a strong euro on tourist spending. The United Kingdom’s sales grew at a double digit rate benefitting from a weakening pound. Japan benefited greatly from Increased domestic and tourist spending, as well as from the reopening of the Cartier stores in Tokyo and New York. Geopolitical uncertainty in the Middle East led to subdued growth.