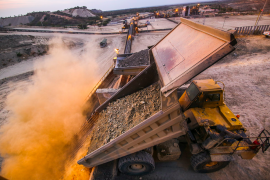 Government authorities in Tanzania have seized a shipment of diamonds belonging to London-based Petra Diamonds, saying the miner under-declared the value of its mineral exports. On August 31, customs seized a parcel containing 71,654 carats rough gems at the Dar Es Salam airport as they were being exported to Antwerp by Williamson Diamonds, in which Petra holds a 75% stake and the Tanzanian State 25%. Williamson Diamonds submitted documents stating the shipment to be worth $14.8 million – documents the Ministry of Energy and Minerals certified – along with the requisite KP certificate, but the State subsequently disputed the value of the parcel., saying it was worth $29.5 million. The government then ‘nationalized’ the diamonds. Petra Diamonds has now suspended operations at its mine in Tanzania and said authorities are questioning a number of “key personnel”.

Reuters reports that Tanzania’s Finance and Planning Ministry issued a statement reading: “While Williamson Diamonds Ltd declared in its documentation that the value of the diamonds was $14.798 million, a fresh valuation done by the government established that the actual value of the diamonds is $29.5 million.” It continues: “Among the legal action to be taken include the nationalization of all the diamonds seized after it was established that there was cheating involved in declaring the actual value of the minerals.” Petra Diamonds refutes these claims, saying that its operations at the Williamson mine are conducted in a “transparent manner and in compliance with legislation in Tanzania and the Kimberley Process. The government has complete oversight of the diamonds produced at the mine, which are physically controlled by a number of different government representatives in conjunction with Petra from the point of recovery until the point of sale.”

According to yesterday’s article from The Guardian, Petra said, “The 71,645-carat consignment had been given a provisional value of nearly $14.8m by Tanzania’s diamonds and gemstones valuation agency before being prepared for export. Receipts for the royalty payments showed it paid nearly $888,000, as well as an ‘inspection and clearing’ fee of nearly $150,000.” It said the final sum to be paid to the government was dependent on what it received from the sale of the gems, rather than the provisional valuation. The company said, “The competitive open-tender process utilized by Petra is also used by several other diamond mining companies and has a proven track record of transparent price discovery. Petra is committed to engagement with the government in order to resolve this matter and ensure that the correct information is available to all parties.”

The Guardian further notes that, “Tanzania has locked horns with several foreign mining companies since the 2015 election of John Magufuli, who as president has sought to extract higher value for the country’s raw materials.” In that article, they note that mining companies often sign off on ‘sweet’ deals that indeed deliver insufficient tax returns in relation to the value of the contracts signed. When the mineral exports start flowing, the governments feel cheated – and in hindsight, perhaps rightfully so. Magufuli last week ordered a review of Petra Diamonds’ contract and asked senior public officials to resign over the outcome of an investigation into the mining sector. One minister and a deputy minister quit their posts as requested.

Reuters further reports that the president’s actions are a continuation of a crackdown in a mining sector that accounts for about 4 percent of Tanzania’s gross domestic product. On 3 March, reported African Arguments, the government imposed a ban on mineral exports and ordered an audit that found Acacia Mining - a subsidiary of Barrick Gold and the country’s biggest gold producer - grossly understated the value of its unprocessed mineral exports and taxes it owes Tanzania, a finding the company also refuted.

Again in this case, it appears that the value of resources established in the original agreement between the miner and the government, and the value of those resource after export, are suffering from a serious disconnect. As Maya Forstater and Alexandra Readhead ask in an article from July 6 referring to the Acacia case, “Did the Tanzanian committee find evidence of the massive illicit financial flows that the high-level panel promised, or have impossible expectations inflamed the legitimate question of what would be a fair, equitable and stable mining agreement?” For, they note, “While the committees’ findings are implausible, this does not mean the government isn’t justified in its concern about Acacia’s tax payments.” In the interest of all involved, the hope is for a balanced agreement, lest Tanzania lose investors as investors lose confidence.