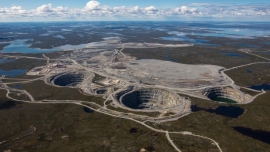 Canada's Dominion Diamond Corporation, is considering an investment to extend the Ekati mine by going underground at the Fox pit. According to a preliminary economic assessment (PEA) the expansion is expected to extend mine operations by seven years. The current mining plan accounts for Ekati to operate till 2035, with production coming from six open pits and two underground operations.

If Dominion agrees to the Fox Deep project, estimated to cost $628 million to develop and $1.4 billion to operate, it will prolong activities till 2042. In that time frame the mine hopes to recover approximately 11 million carats. Operations at the Fox open pit were halted in 2014, following a decade of mining which produced more than 8.7 million carats, the corporation said in a statement. The PEA, conducted by SRK Consulting (Canada), estimated the projects present net value to be $187 million.

Following the PEA, a pre-feasibility study is expected to be completed by the end of 2018. According to Paul Zimnisky, independent industry analyst, Dominion will be “looking at the actual value of the project and is it worth making an investment and move forward." Variables include future diamond prices, the cost to build the mine, and the regulatory timeline.

In a separate announcement, two of Dominion’s largest shareholders, Institutional Shareholder Services (ISS) and Glass, Lewis & Co., had recommended other shareholders to back the prospective $1.2 billion takeover by the Washington Companies. A meeting to approve the deal has been scheduled for September 19.