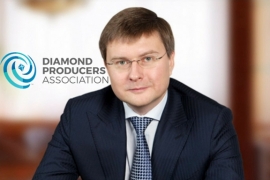 Alrosa’s President, Sergey Ivanov, has joined the board of the Diamond Producers Association (DPA), the Russian miner announced on Monday. Ivanov will replace the position vacated by the former Alrosa VP, Andrey Polyakov, before he left the company.

The DPA board consist of other CEO’s and senior executives from the seven leading diamond producers with the aim of promoting diamonds generically, whilst specifically targeting millennial buyers. "I am delighted to join the DPA team and appreciate the efforts made by the association to promote our business,” Ivanov said. “Strengthening the demand for jewelry with diamonds, and reinstating the diamond as an emotional symbol, is necessary for a stable existence and the development of our industry.”

Alrosa is one of the founding members of the association and is the world’s largest producers of diamonds in terms of carats. Since being founded in 2015, the association has targeted the US with its “Real is rare. Real is a Diamond” slogan. In June the DPA announced that $57million had been set aside for a full-year marketing investment, part of which will fund the future promotional campaigns which will also be launched in China and India.