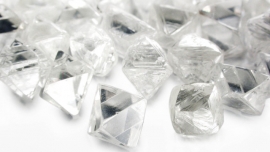 In August 2017, Russia's ALROSA Group rough diamond sales by value amounted to $255.7 million, a 5% increase over August 2016. The company's polished diamond sales for the month amounted to $1.9 million, a sharp decline from the $6.3 million sold in August 2016, bringing overall sales for the month to $257.6 million. For the first eight months of the year (Jan.-Aug.), ALROSA's rough sales remained flat, with $3 billion in sales this year compared to $3.1 billion for the first eight months a year ago. The miner has sold $64.2 million in polished for the year thus far, a 9% decline from the $70.5 million polished sold during the first eight months of 2016. "August is traditionally low season for trading. This year was no exception, although sales volumes in August were slightly higher than a year earlier", ALROSA Vice President Yury Okoyomov said.

Meanwhile, Interfax reports that the Mir mine will not produce again in 2018, citing ALROSA CEO Sergei Ivanov from the sidelines of the Eastern Economic Forum. He declined to say when exactly production might resume. The internal evaluation of other Alrosa mines has come to an end, Ivanov said. Some critiques have been made, but these do not pose any serious danger, he said. The Mir mine contributed 11% to Alrosa's entire annual production in the first half of this year. As a result of the August 4 accident, openings and equipment at the Mir mine were destroyed, and two mine levels were flooded. A total of 143 out of 151 workers were rescued. One of them later died in hospital. The search-and-rescue operation proceeded round-the-clock for three weeks. Alrosa formally announced the rescue effort's end on August 26; it said there was no hope of finding the eight missing workers alive.

Former first vice-president of the diamond mining company Yury Doinikov told journalists that in his opinion, "It will take at least four years [to restore the Mir mine's serviceability] provided urgent engagement of a design institute, funds, and skilled personnel." Additionally, ALROSA is prepared to allocate additional amounts of large rough diamonds to support the Russian diamond cutting industry, Ivanov said. "There is emerging demand in Russia for an assortment of large rough diamonds, more than four grainers [1 carat]. But in our production it amounts to just 2%, and we sell part of this raw material under long-term agreements that we would not like to revise much. But nonetheless, we have found the possibility to allocate additional volumes [in this category] - about 10%. This is a substantial amount for our company, particularly in light of the loss of certain amounts at the Mir mine. Nonetheless, we're committing and are prepared to support this initiative that we will provide additional amounts to the Russian market," Ivanov said.