Lab-created Diamonds: Where to Go from Here 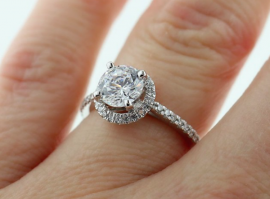 Independent analyst and consultant on diamonds and the mining industry, and publisher of the Zimnisky Global Rough Diamond Price Index, Paul Zimnisky has published an in-depth article on the current state of lab-created diamonds and where the industry goes from here. Reprinted from Paul Zimnisky Diamond Analytics, courtesy of Paul Zimnisky.

The natural diamond industry refers to as them synthetic, while the producers of these gems prefer the moniker lab-created or lab-grown. Personally, I think man-made is the most proper description. However, regardless of terminology the development of diamonds not created by nature is advancing faster than ever before.

The technology of man commercially producing diamond has existed since the 1950’s, but it was not until about five years ago that an engagement-ring-quality equivalent hit the market. In recent years an unprecedented amount of capital has been invested by companies advancing lab-created diamond production technology aimed at better size, quality, and production economics.

The implications of the progression range from possible changes in consumer jewelry traditions and preferences to the advancement of diamond application in a wide array of non-jewelry-related industries. The ultimate magnitude of impact lab-created diamonds will have is of course contingent on many factors.

When it comes to jewelry application in particular, I see the success of lab-created diamonds dependent on branding and marketing, production economics, consumer perception of value, and underlying secular demand for diamond jewelry.

Branding and Marketing
Branding and marketing has always been an integral component of successful luxury goods as it educates and creates awareness, builds loyalty and trust, and creates incremental value through prestige.

In the case of lab-created diamonds, branding and marketing is especially important given that there are still consumers that confuse the difference between a lab-created diamond and that of a diamond simulant. The former is distinguishable from a natural diamond but still chemically diamond, while the latter is not diamond, with typical examples being moissanite, cubic zirconia and white sapphire. In addition, since most major brick-and-mortar jewelers and department stores still do not sell lab-created diamonds, it is up to the industry to create consumer awareness.

The breakup of the De Beers monopoly a decade-and-a-half ago resulted in the subsequent phasing out of generic diamond marketing, which led to the rise of branded diamond jewelry. Branded diamonds cater to consumer concerns related to authenticity, quality and ethical sourcing, while also providing a more unique alternative to generic diamonds for an ever-evolving consumer that more-and-more values self-expression. The lab-created industry has an inherent advantage of automatically being perceived as authentic (for what it is), ethically sourced, and fundamentally unique in a way that could cater to a younger "high-tech" demographic. These are pillars that a brand could be built around.

As far as creating incremental value through branding, the lab-created diamond industry should look to Mikimoto (private) for inspiration. In addition to developing and advancing the cultured pearl production process, Mikimoto through branding created not only prestige but arguably its own product-class of jewelry. Today there are natural pearls (although extremely rare), Mikimoto pearls, and generic cultured pearls, with the later a commoditized product sometimes selling in the price category of fashion (non-fine) jewelry. To put Mikimoto’s brand in perspective, the company's New York store is located on 5th avenue next to Bulgari and across the street from Tiffany (NYSE: TIF) and Harry Winston.

Production Economics
The lab-created industry’s primarily edge over the natural equivalent is pricing. Fundamentally improving production economics will allow for outright lower pricing and higher margins that could then be reinvested into branding and marketing.

As capital continues to be invested in improving production processes, lab-created diamond production costs will come down. Some producers will vie to be the low-cost generic producer, with their angle selling diamonds for a significant discount to naturals.

Currently, lab-created production is greatly skewed towards smaller, lower-quality stones, that trade at significant discount to naturals. However, most stones in popular bridal-sizes are currently selling for about a 15-20% discount to natural equivalents (see figure above).

In recent quarters prices of smaller bridal-sized lab-created diamonds, for example, round half-carat, near-colorless, VS clarity, VG cut, seem to have stabilized, while larger sizes such as 1.5 carat in the same grade, are still noticeably coming down in price. This is most likely the result of production capabilities for more-difficult-to-produce larger sized diamonds catching up with smaller.

In the case of very small stones, or melee sizes (<1/5 carat), current production is prevalent and supply is seemingly unlimited. A significant amount of this production is coming from producers in China that traditionally have made industrial-grade synthetics but have since upgraded manufacturing technology to produce higher-quality synthetics in near-gem and better qualities that can be used in jewelry.

While the overall price trend of lab-created diamonds versus naturals has decreased over the last year-and-a-half, the relative discount is still far from that of other lab-created gems. To put this in perspective, generic lab-created rubies, emeralds, and sapphires in all sizes and qualities typically sell for a 90% discount, or more, to natural, untreated equivalents.

Part of this disparity is simply a result of synthetic diamond production being much more complicated than that of the other aforementioned gems, but it also can be attributed to lab-created producers holding back excess inventory to avoid suppressing market prices in more expensive categories.

Globally, the number of lab-created diamond producers active in the larger-sized fine-jewelry category is relatively small, allowing them to protect prices, but it is unclear how long this strategy can be maintained, especially in the absence of a strong brand worthy of a premium.

Consumer Perception of Value
Perhaps the biggest challenge for the lab-created industry is selling a diamond that arguably lacks resale value. The supply of lab-created stones is theoretically unlimited. As production capabilities and economics improve, even larger, higher-quality lab-created diamonds will become commoditized, making them essentially a consumable product with no resale value.

The store-of-value of natural diamonds ranges considerably. At the melee end of the spectrum, there is typically zero or very minimal resalability, while at the highest-end, fancy-colored blue and pink exceptionals, diamonds have returned similar to what great artwork or high-end vintage cars have.

On average, diamonds have traditionally held up against inflation (see figure below) and most typical engagement-ring-quality diamonds can be resold, even if at a 50% discount to the retail price paid.

In Asian cultures in particular, the perceived intrinsic value of jewelry is perhaps the most significant component of the purchase decision. For example, in India, consumers typically will only buy high-karat gold jewelry as it is viewed as wealth or savings and is typically given as a wedding gift with that perspective.

With China and India being the two fastest-growing diamond jewelry markets, the lack of intrinsic value of lab-created diamonds could be a particularly challenging factor for the industry.

The lab-created industry is also competing with recycled diamonds.

For consumers, especially in the West, which may be willing to forgo the intrinsic value component of a diamond purchase for what they perceive to be a more environmentally conscious decision, a recycled natural diamond is arguably a more compelling alternative to a lab-created equivalent. There is zero incremental environmental cost to buying a recycled diamond, where as a synthetic diamond requires a significant amount of energy to produce.

Secular Demand for Diamond Jewelry
In recent years diamond demand growth has been affected by declining marriage rates and by younger generation’s growing preference for discretionary spending on experiences over material possessions.

In the U.S., the Millennial generation (20-35 yo) is the most independent generation in the nation’s history. Made possible by advanced education and technology, independence is seen as a source of pride among younger generations and marriage is not perceived as necessarily as it once was, or at least not as early in life. There is a similar trend in Western Europe and Japan. In China, declining marriage rates can be more explained by a disproportionate population of men over women, a result of the one-child policy that ran from 1979 to 2015.

In addition, U.S. Millennials have less of a survival mentality than previous generations, which were influenced by depression and war. There is arguably a link between a survival mentality and a desire to accumulate possessions, and while young generations today have their own set of problems, basic survival is not one of them, which has shifted priorities more towards enjoying life via travel, leisure, and wellness over collecting and storing of wealth.

The lab-created industry could possibly use these trends to their advantage by selling the idea that a lower priced alternative to natural diamonds allows for owning a diamond while still leaving discretionary spending for experienced-based purchases.