Botswana Diamonds Goes Exploring for Kimberlites ... in the Library 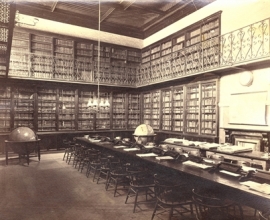 Leave it to Botswana Diamonds' managing director James Campbell to find a groundbreaking approach to diamond exploration. Dylan Slater of Mining Weekly Online writes, "Three obscure kimberlites in the Free State, near the origin of the South African diamond rush of the 1800s, have piqued the interest of diamond exploration and project development company Botswana Diamonds." Last week at the mining networking platfrom Africa Mining Network, Campbell revealed the company’s interest in the Kimberley, Jagersfontein and Koffiefontein mining areas. Many of the kimberlite discoveries made by Botswana Diamonds in this area did not occur through geophysical, but rather through the Africana Research Library, in Kimberley. “It is absolutely fascinating that we found these discoveries through a public library,” Cambell told Mining Weekly.

As Slater writes, Campbell views these kimberlite discoveries are a “very exciting proposition”, saying there were "at least another half a dozen diamond mines" surrounding the three discoveries. These mines were operated before a mining industry crash occurred in the 1930s. “No-one would have ever heard of these other mines,” he said. Botswana Diamonds found early diamond mining registers proving the existence of diamond mines in the vicinity. They then secured exploration rights in the relevant areas, but will only be able to undertake limited physical exploration this year to do budget constraints.

“What is interesting here is that these kimberlites have potentially never been looked at ... if they have been looked at, that would have been 40 years ago, or so,” Campbell told the magazine. In this regard, Campbell points out that the leaps in exploration technology over the decades would mean that deposits deemed unfeasible in the recent past may turn out to be feasible today, and could point to a significant diamond resource. “This is the upside ... we have in South Africa.” In Botswana Diamonds' constant pursuit of the next big diamond discovery, Campbell tells Mining Weekly Online that its focus for this year is on geophysical and geochemistry work at these three sites, thereby enabling Botswana Diamonds to rank each kimberlite in terms of any potential commercial potential. “Those we find to have any commercial potential will undergo a drilling campaign in 2018.”